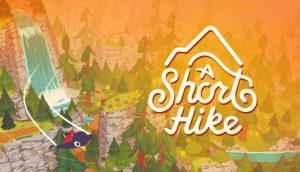 It all begins with our main character in a car on their way to Hawk Peak Provincial Park. Our protagonist Claire, is an anthropomorphic bird who is going there to spend time with her aunt May who works as a Park Ranger. In the introduction scene we immediately notice something isn’t right based on the dialogue between the two characters. Once they have arrive at the park Clair sleeps the whole day, waking up late just like a teenager would. She gets frustrated that there is no reception as she is waiting for a very important call, so her aunt suggests she climb the highest peak in the park (Hawk Peak) to get reception. Deciding to go through with it, we now follow Claire as she explores the park meeting a range of characters all the while trying to make the hike to Hawk Peak. A short hike is an animal crossing turned indie art-style adventure game. Being all about exploring the various areas of the park, finding items, completing quests and finding hidden treasures. All of this is tied into the progression of the game which is quite straightforward, get to the top of the mountain. What is stopping you? Because the hike is such a hard one, you have to collect gold feathers. These golden feathers allow you to double jump more, climb for longer periods of time or run for longer periods of time. So in order to complete the hike you have to have enough feathers. These feathers are either found, or bought in different ways.

My favourite part about the mechanics in this game is how they all tie in so well with the genre and the exploration elements of the game. While there are loads of things to talk about I would like to specifically talk about three things: The way you traverse the level is by either running, climbing, gliding or jumping. While in the beginning of the game you are held back by the amount of gold feathers you have, all of these mechanics are still so very satisfying, with the whole experience behind the game being about hiking, the developers have managed to create a set of super satisfying ways to do that simple task of taking a hike.

One of the reasons that it is so satisfying is because of the level layout, essentially the lay of the land is like an island where the middle is the highest point but all around the place you are met with different vertical layouts. Because all of these areas to explore you find yourself going up and down and continuously find hidden areas with ease, this lets you feel like you’re on real life hike. Especially when you find little sections along the trail that you like, or you stumble across a nice view. 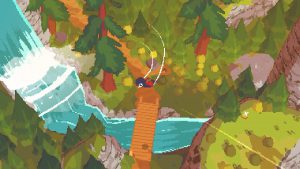 I also want to mention the interactions you have with the characters scattered around the level. Not only is the writing amazing, the characters are so diverse with so many of them having a variety of different dialog depending on when you talk to them not to mention how often. A Short Hike is lighthearted and easy to digest, leaving every conversation you have to be pondered about and not left with a feeling of confusion.

The sound in this game reminds me of a mix between Zelda and a modern pixel RPG. With the sound effects having a pixelated effect however the background music being fully high quality. While I do feel that the developers missed out on one point about hiking which to me is a big deal, is the silence, the feeling of bliss and pure nature that you receive. But I also have to say that they did an amazing job with the soundtrack, Mark Sparling crafted excellent audio that changes based on the weather, location and what the player is doing. Letting you feel both epic excitement as you make your way to the top. I especially like the lo-fi chill music when gliding through the rain. 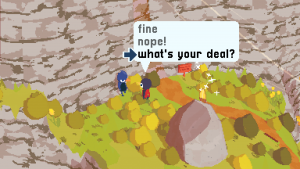 If the review so far haven’t shown my excitement for the game then I don’t know how else I can. In my opinion one of the best games of 2019, I could spend hours dissecting some of the design mastery within this game and I implore everyone to try this experience. While most other reviews on A Short Hike agree with me, aside from condemning it for having a short story line. I think it’s alright, because the story is just the facilitator for the experience of taking ‘a short hike’ which they executed well.