Have you ever wanted to work for a mysterious organisation with high-tech gear? Have you ever wished you could wield a futuristic laser sword? Do you want to sprint around, with pyrokinetic powers, a ridiculous amount of bullets, a bunch of guns (some of which can launch grenades, electric bullets, or just spray fire), while the world around you flies off into a black hole in the sky?

Are you ok with not really knowing what on earth is going on?

Then I got the game for you!

Bright Memory: Infinite is the expanded and complete version of Bright Memory: Episode 1. A first person shooter, with a lot of hacking and slashing, in a detailed and beautiful realistic world, Bright Memory is a fast-paced game that knows how to escalate, and escalate hard. 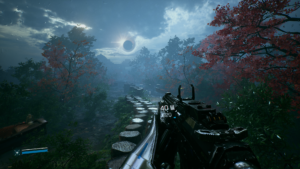 There’s a lot to this game, and yet, not that much at all. What I mean by that is that it’s pretty linear, you have a few weapons and abilities, and a handful of enemy types to face off against. However, there is a satisfying level of detail to the mechanics, from movement to the guns you use, and the environment you progress through.

So, your abilities? Well, you have a special sci-fi arm that lets you drag enemies towards you from far distances, and then you can just… explode that enemy with a flex of your hand. You also have a special sci-fi sword that can slice and dice your enemies like a hibachi chef demolishes a prawn. Your sword can also launch laser waves, making it a ranged weapon as well. You know, in case you want to switch up from your overpowered ridiculous guns.

You have an auto rifle initially, and eventually you unlock other guns, including an auto pistol that shoots electric bullets, and a sniper rifle. Each gun also has a secondary ability! So your sniper rifle can also shoot grenades. And your auto rifle shoots bigger bullets.

Bright Memory also gives you so many bullets all the time. And it is really satisfying switching between your weapons and just being this whirlwind of death and destruction. The audio and animation adds to this as well, so each attack and weapon feels weighty.

But that’s not all! You also have movement abilities, like double jumping, running along walls, telepor-I mean dodging attacks, blocking melee attacks and bullets with your sword. This game is going to throw enemies at you, and you’re just going to deal with all of them, darting all over the place, switching between grenades and shotguns and swords oh my. You can play frantically, recklessly, and with minimal thought. Sometimes you’ll have to be strategic, but there’s not much you can’t solve with a sword and a lot of bullets. And the ability to explode enemies with your mind.

All these abilities and weapons can be upgraded as you find relics throughout the world, encouraging you to do a bit of digging and crate-breaking.

And you’ll need those upgrades in order to face the storm ahead of you. Literally, you got called into this situation because there was an unusual storm happening. So of course you have to fly there with a futuristic plane with warp technology, which reveals the cause of the storm: an actual black hole in the sky. And of course we have to head right towards it because although we don’t really know what’s going on, General Lin and his army are there and apparently that means bad news.

Also, you get a car for one section of the game. It’s a really fancy car, and I felt bad driving it into tanks and stuff, but even driving through mud and bullets feels satisfying, and it’s only a 5 minute long portion of the game.

Have I mentioned this game knows how to escalate? You get called in to check out a storm, find a black hole, and you have to take out a bunch of regular baddies. But now there’s a… time rift I guess? And ancient soldiers are also fighting you. And sometimes giant statues, wild pigs, a guy who is on fire, and you’ll be fighting in the middle of flood waters, on the back of a plane flying directly into the blackhole, mountains, bridges, in a busted up cafe. I had to take a break, put down my controller, and just ground myself for a little bit.

I do have a few gripes. The game throws you into this wacky situation, and I just wish I knew more about it than the most bare-bones background information possible. Who is General Lin? Why is he here? What does he have to do with the black hole? How are we stopping a black hole? We keep going towards it like we know what we’re doing but the guy on coms is just like ‘we don’t know! Go check it out’. The game is pretty linear, it boxes you into one path and one path only. We have these movement abilities and a grappling hook, it would’ve been fun to do more with that and encourage a bit of exploration. The upgrade relics are right in the main path, so they’re not doing much exploration-wise.

The movement is also a bit janky. The wall climbs and jumps in particular. Most of the time it’s not something you’d really notice, but it does feel frustrating in some areas, especially when you have to pull off a slightly more challenging manoeuvre. It would slow me down a lot at times. 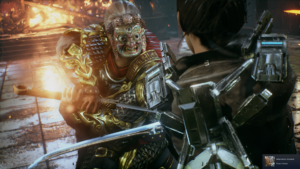 The sound adds a lot to this game, but only the environmental and action sounds. The thud thud thud of my gun shooting, combined with the recoil and screen shake is delicious. Hearing the rain and storm, the plane engines screaming is overwhelming. Straining to listen to the patrolling guards, so I can sneak up on them with a meat cleaver. It’s good! The voice acting? Dreadful. You have one of the bad guys laughing like a caricature, and not in a fun way. The other bad guy just sounds like he was told to mimic a James Bond villain, but he never actually watched a James Bond movie in his life. The only character with decent voice acting is Wake, and he has maybe 5 lines. I love him. Now, here’s the main thing about this game, it’s actually really short. My first run was just over 2 hours long. My first run. Because this game encourages you to make multiple runs, not to explore different paths or outcomes or anything. Just to do the exact same journey, but with harder enemies, all your upgrades, and do it quicker this time. If you do, you might unlock some alternative costumes for Shelia! Like a, uhh, cheerleader outfit. Or a bikini. Would’ve been cool to have a skin that looks like the ancient warriors but ok.

But hey, it’s so satisfying to play that I do find myself thinking about making another run, see if I can improve my time. I just would’ve liked some variety, and the ending? Yawn. It was building up to something truly epic, and just as I was processing what was happening it… was over. And you’re supposed to just do it again. I do feel a bit cheated. I had a lot of fun, I’ll play it again, but it’s actually a lot of really awesome frosting on a pretty plain cake.