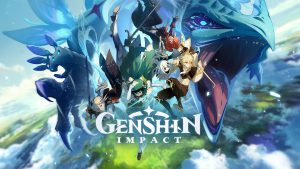 The story begins as two twins who are traveling across the stars end up in Teyvat and discover that it’s in the midst of a war, so the two twins decide to leave however they are caught out by a very powerful god, this god like character captures one of the twins thus separating them from each other (the twin that is captured depends on the choice of you the player). A period of time passes, and you (the twin that was sealed) awaken to meet Paimon who plays the role of guide and tutor. You are then led to the town of Mondstadt after you meet Stormterror of course, a dragon who later becomes the first antagonist you meet (trust me there’s no spoilers with that one). Over time you meet many different characters, encounter world missions, side quests, develop a reputation with the knights of Favonius (protectors of the realm), and create rapport with the people of Mondstadt. All this while you still search to find your missing twin and hopefully find the answers to the many questions that form throughout your journey.

Genshin Impact is a story rich game with many a quest. The Teyvat universe is filled with several different nations, Mondstadt, Liyue, Inazuma, Sumeru, Fontaine, Natlan, Snezhnaya, and Khaenri’ah.  So far you can only play in Mondstadt and Liyue. The game is huge so there is a lot to explore (not to mention download) and aesthetically looks like a fusion of Zelda Breathe of The Wild and the anime series Sword Art Online, It’s visually stunning and is nothing short of a masterpiece. 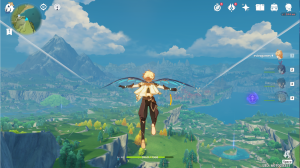 The gameplay is that Genshin Impact is an open world action role playing game, so you are free to explore as far and wide as you’d like, running, climbing, swimming, and gliding! Everything is of course limited by stamina which at times I found frustrating and thought maybe this feature would hinder my free to roam experience, however, I didn’t find that to be true as stamina aids in creating an engaging limitation when exploring but also fighting your enemies. Enemies yes! Of which there are many, as you progress through the game there a many different types of baddies that you encounter such as; Hilichurls which are goblin like monsters wearing masks, that run towards you with clubs or shoot arrows, there’s big and small ones of these. There is Abyss Mages that specialise in a particular elemental power and would be considered a much harder enemy to battle. There’s also Fatui which are bosses that harbour elemental powers and are definitely less common, but the most common enemy you’ll fight are slimes which are simple minded big blobs that bounce around either towards you or spitting elemental balls of frost, fire, or electricity.

Speaking of elements, the elements present in Genshin Impact are Anemo (Wind), Geo (Earth), Electro (Lightning), Dendro (Nature), Hydro (Water), Pyro (Fire), and Cryo (Frost). Each element is attached to a different nation of Teyvat and each nation themed after a real-world country such as Mondstadt being in close resemblance to Germany and Liyue to China. I haven’t mentioned much about the protagonist, yet have I? Well there is just so much happening that I didn’t just want to start there. You the player controls not one but four different characters in a party, that you can switch between even mid combat. You can also upgrade your party members when you collect new characters, each character will have their own element that they specialise in, you can level each character individually, as well as weapons and special items. The big thing is to diversify your party, so you have different elements to switch between as elemental enemies are weaker to certain elements e.g. water hurts fire, fire hurts ice, and so on.

Now getting new characters isn’t just a matter of meeting them, Genshin Impact is still a Gacha game so let me explain what a Gacha game is first. Genshin Impact is free to play but the catch is that if you want certain new characters you must spend some money to receive a randomised item. It works similar to loot boxes. Basically, the Gacha element is there to incentivise you to spend real world money, it’s also how the developers get paid. Now you can get by without spending money of course! But you will be limited in some ways on what characters to play. Some characters that you meet you can only get from the Gacha mechanic while others are gifted to you throughout gameplay. I have spent close to 50 hours playing and not spent a dim and still have had an amazing play experience so don’t feel the need to buy if you don’t want to.

Genshin Impact has so many different quests to go on such as world quests, main plot, side quests and of course daily quests to keep you logging in regularly to get some sweet sweet Mora which is in-game currency that you can spend on cooking ingredients, upgrades for weapons and items, and leveling up characters.

When it comes to healing you cook meals that you then feed your party so that they can regain some HP however it has been a little frustrating to do as you must open your inventory > find the meal you want to feed a character > then select a character > then continues that process again if you want to heal more than one member of your party. miHoYo the developers have said that there will be a small update in November to make some minor improvements with a much larger patch coming in December that will add a whole new zone, touch up some of the UI, as well as provide players faster ways of healing that isn’t so tedious. Genshin Impact has a gorgeous soundtrack titled The Wind and the star Traveler which was released on the 18th of June 2020 and is tastefully composed by Yu Peng Chen from HOYO-MIX. There are 15 tracks on the album all over which feature in the main game and all of them compliment the in-game experience so well. With orchestral tones and a strong string section inspiring intense and dramatic feelings during battle to a jaunty tune with delightful sounds for exploring the big wide world of Teyvat. This composition is complex, rich and at times feel ethereal with the haunting female hum gliding ever so gracefully through the full body of the orchestra. You won’t want to miss a cutscene or fight sequence with this awe-inspiring soundtrack. Genshin Impact has truly a captivating visual presence, heart-warming story, and completely deserves it’s success, grossing over $100m in less than two weeks after it’s launch it is the most successful launch for an original IP from a Chinese Developer ever! And is the second highest grossing game globally on the iOS. It is completely understandable that Genshin Impact would leave such an impact and I hope that you get a chance to play to, I mean it is free after all. I hope that your journey through that magical world of Teyvat leaves you with an equally positive experience as me.