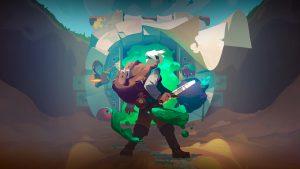 Set in a distant world where strange ruins appeared filled with mazes and puzzles to solve. Will, the games protagonist and wannabe hero dreams of finding awesome loot to sell that he finds from within dungeons, as well as, not to mention killing dungeon monsters. Each dungeon is named after the people who attempted to loot them however as time has gone by dungeon crawling for rare finds hasn’t been very lucrative. In order to find rare and expensive items you must dive deeper and deeper into the labyrinth like dungeons which can become a high-risk investment. Will is a merchant who owns a shop called Moonlighter in a little town called Rynoka whereby night Will searches dungeons for items and by day sells them in his store. Moonlighter has a sweet pixel art style which couples nicely with the dungeon crawler genre. The animations are cute and simple which flow well with the overall visual design of the game. 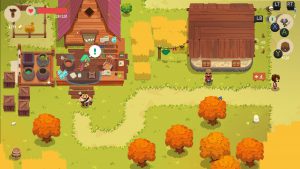 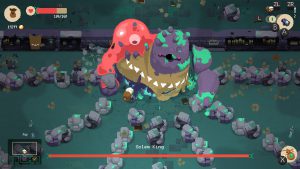 Moonlighter is a randomised dungeon diver where you go off in search for loot, but you also have a side hustle as a shop keeper in town. The game is divided into these two major components that work together well. On one side you have the action adventure aspect where there are procedurally generated dungeons, where you fight bosses, collect gold and items and of course fight lots of enemies. Then on the other side there is the shop where you must consider consumer demand, shop upgrades, whether you spend gold on new equipment or to expand the town to further the games progression. These two elements come together well and feed each other, you will dungeon crawl for items and then essentially sell them in the store at a price of your desire. The tricky thing is managing the greed factor, it is very easy to get carried away in a dungeon searching for more items however, if you die you can say goodbye to that recently gathered loot. 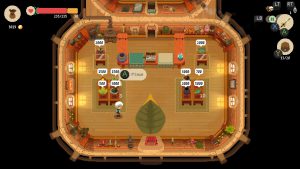 The shop requires good management skills and learning all you need to learn when it comes to the shop is taken slow and steady from a tutorial perspective everything was smooth and enjoyable. The dungeon crawling was also excellent, my only dig would be some of the fighting mechanics were a little rough and sometimes it was hard to gage distance between myself an enemy which therefore lead me to take unnecessary damage. Some of the little features that was a nice touch is this pendant you receive early in game that converts items into gold, this allowed me to clear space in my inventory while on the go however you do have to consider the value of the items you convert with the pendant will be less than what you can sell in Moonlighter. There is a lot to focus on and consider from the gameplay perspective which makes this indie gem a fantastic experience. Exploration and achievements are the big focus with this game. 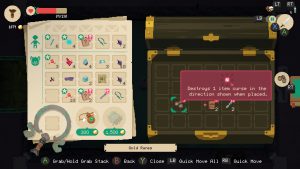 The music is cinematic with pleasant melodies that propel you further into adventure. The soundtrack is made up of sweet little guitar riffs and floaty sounds of the piano, this combined with charming orchestral elements. The score generates feelings of mystery and curiosity. David Fen composed and produced the soundtrack for Moonlighter except for Pablo Caballero composing and producing the original announcement trailer for the Nintendo Switch. There are 26 songs that comprise the soundtrack which are delightful and cheery at times and then there’s the mysterious and dangerous sounds of the dungeons. The overall sound of Moonlighter compliments the visuals and game play experience wonderfully. 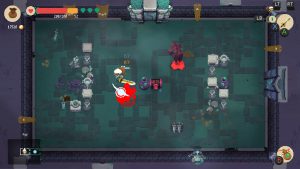 Moonlighter is a highly praised indie game that has over 1,400 reviews on Steam, from a development perspective this game has been a huge success. I would like to reference an article that discusses the success of Moonlighter from Gamasutra which touches on the stages of developing a successful indie game, for all you indie buffs out there.

Moonlighter is a brilliant game that teases your greedy bones, challenges you, and encourages you to explore further in every dungeon dive in hopes of finding something rare and expensive. This game is a management experience where you must consider the economy, your business and your personal goals as the player. Moonlighter has so many items, enemies and features that there is even a Wiki on Gamepedia for all your wondering. The sounds, visuals and feel of the game is charming and really makes you feel like a merchant in a fantasy adventure world. I highly recommend this game for people who are driven by strategy and achievements.