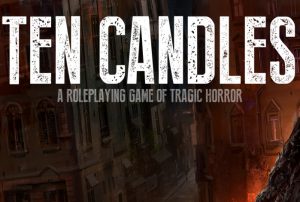 Ten Candles is a tragic horror tabletop RPG with zero-prep and a story focus. It is one of the most unique role-playing games I’ve ever played, notably (but not only) because it’s played in the dark, lit only by candlelight. Very little of the world is set in stone, most things are decided by players as play progresses. The only similarities between sessions are an unnatural darkness that smothers the world, the evil force known as “them”, and the inevitably of your death. Not the possibility, not the probability, the certain, inescapable death that marks the game’s end.This might sound strange for a survival horror game, but Ten Candles is specifically a tragic horror game.  It isn’t a game about fighting monsters, saving the day, or even just survival. Ten Candles is a game about people pushed into darkness and despair. It is about finding hope and meaning where none remains.

To play you’ll want a GM, 3-5 players, paper, ten candles, and a butt-load of dice. The physical rule book can be purchased from the publisher online but if you’re okay with digital, the PDF is all you need! Supposedly a session plays in 2-4 hours but every session I’ve played sat between 4 and 5. That might be the game’s fault or the fault of me as a player, but it was still good fun the whole time. In ten candles the game master takes control of everyone and everything that isn’t a player character. Despite being responsible for every danger the players face, and deciding the consequences, they do not act as an opposing force but as a neutral facilitator of the story. The characters will die, there’s just no rush to get there. For the most part players only control their characters but, between chapters, everyone has a chance to direct the story. This is done via chanting; in case the game needed a stronger occult aesthetic. THESE THINGS ARE TRUE. THE WORLD IS DARK. AND WE ARE ALIVE. The number of decisions is directly tied to the number of candles so a lot can be done early on, but at the end only one truth remains. THE WORLD IS DARK. AND WE ARE ALIVE. Characters are also made collaboratively in the games setup, choosing strengths, flaws, goals, and the darkness within. These traits are key to your (temporary) survival as they can be used to turn the odds in your favor, a failure to success. Each trait can only be used once though, and when they are, you burn that part of your character sheet away. You know you will fall eventually, but not now, not this moment, and that defiance lights up the increasingly dark room with brief hope. The candles aren’t just for aesthetic and burning things, they serve as a countdown for the story and its chapters. The game consists of ten scenes, each ending with a candle snuffed out. This means that, as the story turns darker so too does the actual space, you’re playing in. In the final scene of the game, only one candle will remain, offering weak light for your characters last stand. They can fight as long as possible but inevitably the flame will go out. At the end of every game I’ve played, I’ve been left with a strange, slightly bittersweet feeling. I just spent hours with a character fighting against the odds to live and now they were dead, the game was over, and I would move on. It’s a good feeling though, the one that fuels my love for TTRPG, and the one that keeps bringing me back again and again. 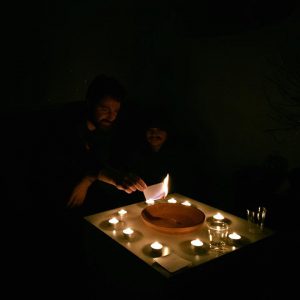 If this review has been particularly intense, it’s because there’s no other way to discuss Ten Candles. It’s a game, but it’s also a collaborative story, a terrifying world, and an occult ritual with friends. Ten Candles delivers the best of tabletop RPG (atmosphere, emotion, high stakes), which many systems can’t offer in entire campaigns, in just a single gaming session. Even if you’ve never picked up a tabletop RPG, Ten Candles is simple enough to understand and interesting enough to win you over. If you’re a fan of survival horror or any part of my review piqued your interest, it’s definitely worth checking out.