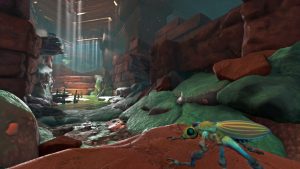 Ugh, you wake up with a hell of a hangover, you, Gregor, and your best friend Joseph had way too many drinks. But you’ve got work, and you need to go find your friend. It sure was nice of him to let you crash at his place. Now to go wake up your friend.

Except… the rooms are getting bigger… no, you’re getting smaller. Your body shifting, changing, suddenly you have more limbs, books tower over you, and your day becomes very surreal.

And as you enter a letter, that is the least of your problems.

You must get to Tower for any hope of regaining your humanity. You must find and help Joseph, caught up in a trial for a crime no one will explain. Two very big problems, for one very small bug.

Your journey isn’t an easy one, with multiple pathways, colourful and bizarre characters, and a surreal, whimsical world, you need to find out why you were turned into a bug, what is going on, why is Joseph on trial, and what is Tower?

Metaphorphosis is a world inspired by the works of Franz Kafka, and it is a beautiful, detailed adventure puzzle game, with a hand painted aesthetic. You are Gregor, now a bug, and you need to figure out what is going on. You’re a bug. So you get bug powers! If your feet are sticky you can climb up vertical surfaces. You have to get creative with how you can navigate the world, in some ways you’re very capable as a bug! You’re rather speedy, you can jump quite far, and walls aren’t much of an issue. But you are small, and it’s very easy to drown, miscalculate and fall to your death, or get crushed by a book. It’s very easy to get lost or overwhelmed by the sheer scale of things, but there is a helpful feature that allows you to get a fly-eye’s view of the world, allowing you to see your destination and goal, and to make your decisions.

You’ll have multiple paths, not just physically, but also with your decisions. Some are obvious, some are easier than others.

And the game has a lot of fun with the fact that you’re a bug and you’re bug-sized. Interesting pathways, unique obstacles, fun and creative ways to get around. There is a sense of wonder and joy as you navigate this world. I am reminded of when I was a child and I’d imagine being a mouse, sailing down the gutter on a ship made of leaves. And the world built at the bug level is delightfully detailed, populated with a variety of insects, speakeasies, and even its own form of government. Many of us are familiar with the frustration that comes with bureaucracy, don’t worry! It is well-recreated here. But even with all that, with everything that’s happening, you find yourself in a forest of mushrooms, or on a tiny ship sailing through the air, or surfing on a supply request form.

It’s beautiful, with a touch of magic and whimsy. 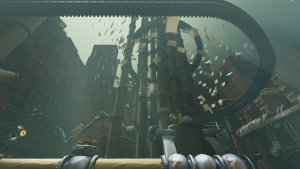 The sound is extremely immersive, you hear your own skittering, changing depending on the surface, the human giants around you chatting through walls, their voices garbled but deep, resonating through the walls. Machines whirring, drawers opening and closing, and a lawyer droning on and on, doing a great job at explaining absolutely nothing. It makes the world feel very big, and you very, very small.

The music is well composed, and a lot of fun, highlighting exciting moments, displaying the scale of the world. I would find myself feeling very nervous at times, as I felt exposed and vulnerable at times. The music contributed to that, but it also lent to the whimsical nature of this bug society you find yourself falling into. The wacky characters you’d run into, the things you’d see and experience. I am not the biggest fan of bugs, but I found myself charmed and intrigued by the world Ovid Works had created. There was the human world that I was aware of, my best friend was on trial for something, and I watched the roadblocks and issues he went through. Gregor is invested in that world. But the bug world is just as intriguing, interesting, filled with vibrancy and character and wonder. And you have your own problems to deal with. So I found myself stressing about my tasks and trials, but also I just had to stop and look around. I wanted to observe and interact with this world. There were towns and groups and even a little cult to check out. Hidden areas, little secrets, a dozen paths to a single goal.

The world is so big, and so detailed, and it made me want to explore. The gameplay was creative, fun, and made me think and plot my path. And the ending… well, I’m not sure where you’ll end up, but it is one I want to revisit later. There are multiple paths, and I feel guilty about the one I took.

It’s kinda weird that as a bug you’d have so much control over what happens, it’s an awfully big responsibility. But the game makes you capable of it.