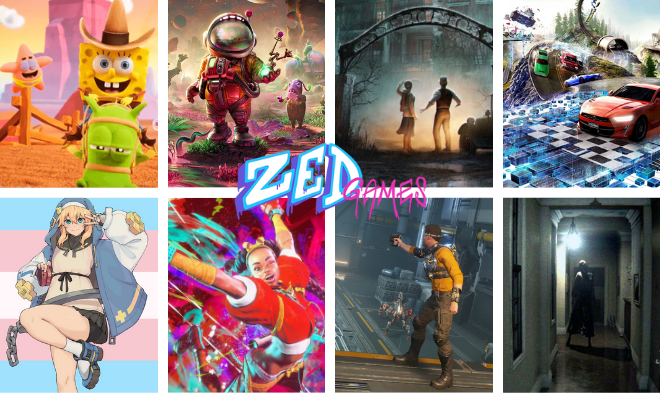 This week in gaming news.

Embracer Group owned THQ Nordic held a showcase last week to show off their upcoming line-up. Included were some new IP’s and the return of some old favourites. A new reboot of the grandfather of survival horror, 1992’s ‘Alone in the Dark’ was shown off, being written by Mikael Hedberg who is best known for his work on Frictional Games’ ‘Amnesia: Dark Decent’ and ‘SOMA’. A sequel to ‘Outcast’ subtitled ‘A New Beginning’ was revealed after the original sequel was shelved 21 years ago. The new single player, 3rd person action-adventure game offers a lush colourful alien world explored by the now jetpack sporting hero Cutter Slade.

The remake of the classic 3rd person RPG Gothic showed off its updated look and we were given another look at the upcoming tactical mercenary game ‘Jagged alliance 3’. A crowd favourite was ‘Spongebob Squarepants: The Cosmic Shake’ a successor to the PS2 era cult classic ‘SpongeBob SquarePants: Battle for Bikini Bottom’.

Along with existing IP’s there was an announcement of a new titles. ‘Wreckreation’ is an open world, multiplayer racer and track building game led by ‘Burnout’ veterans hoping to stick the landing somewhere between ‘Burnout Paradise’, ‘Wreckfest’ and ‘Trackmania’. ‘Space For Sale’ is a cute, sci-fi survival, crafting and property management game where you build homes for aliens.

The strategy genre was well represented also with’ Tempest Rising’, ‘Knights of Honor 2’, ‘The Valiant’ on display and the show ended with a teaser of a new ‘South Park’ game in development and a note that THQ Nordic still has 25 unannounced games in development.

The world’s most prolific fighting game tournament EVO has wrapped up for another year and with it came a slew of announcements. A number of ‘Street Fighter 6’ details were revealed including new fighters and commentators, a new ‘Fatal Fury’ game was announced, a new ‘Tekken’ was subtly teased, there was DLC for ‘King of Fighters XV’, ‘Skullgirls 2nd Encore’, and ‘Nickelodeon All-Star Brawl’ among others and ‘Guilty Gear: Strive’ added Bridget as a new fighter and the series’ first confirmed transgender character, Perhaps the biggest announcement for fighting game fans were a number of titles added rollback netcode to their games which makes online fighting games far more playable. The titles include ‘Samurai Showdown’, ‘Persona 4 Arena Ultimax’ and ‘Dragon Ball FighterZ’.

Next year’s event will be held in Tokyo.

It’s been 8 years since the release and subsequent deletion of ‘P.T.’, Hideo Kojima’s experimental horror teaser for never completed ‘Silent Hills’. Kojima posted about the anniversary on twitter to which a former Konami staffer identified as Pearl L responded:

“Fun fact: since I was the [first-party] lead at the time at Konami, I helped get this product set up on the storefronts, fake publisher and everything and I was the one who had to call Sony and ask them to take it down and block redownloads. That was a super fun conversation”.