You’re in the infamous Bermuda triangle, sent by Divers Investigating Various External Signals (D.I.V.E.S. for short) to check out a strange signal in the depths of the ocean. The voice of the AI, D-NA is robotic, and comforting, guiding you through your tasks. It’s hardly routine of course, as you are encouraged to gather dynamite and then use said dynamite to blow up an entrance in an underwater cave.

And as you enter the cave, well, I don’t think you have to be a rocket scientist to realise that caves and explosives don’t mix. You are cut off from the outside, and radio doesn’t work through solid rock. So, now truly alone, you have to continue your investigation into the mysterious signal. And this entire, mysterious, massive underwater facility you have found yourself trapped in.

Abyss of Neptune is a survival horror game that takes place entirely underwater. With a hidden story, freaky monsters, and a fair bit of fear, all wrapped up with a beautiful and rich environment, it’s easy to become submerged in this game. Abyss of Neptune has a few mechanics to worry about. Other than being able to swim in all directions, and getting the hang of the floaty controls, you of course have to keep an eye on your health and oxygen levels. It’s easy at the start, less so as you progress. Doors and machines within the mysterious facility are often damaged, missing parts, or need power. So there is a fair amount of minor repairs, and battery-seeking you need to do. But I think one of my favourite things is that there are puzzles. They’re small, and not too challenging to solve, but the room you’re in is eerie, dark, and there’s a strange sound that keeps getting closer.
Getting my hands on a harpoon was reassuring to a degree, but the number of bolts you have for it is limited, and using a harpoon isn’t the easiest thing on the planet. If you stay calm you can manage, and I didn’t find myself panicking much, but I definitely was on edge.

So you have to make your way through a partially functioning, maze-like facility that is deep underwater and filled with overgrown coral, damaged machinery, and the remains of the people who used to occupy it.

And the monsters of course.

But you can hide in lockers, so that’s not too bad. There is a lot of visual atmosphere to this game, with dark rooms, foreboding shapes made of coral and destroyed equipment, and strange, eerie sounds. But, I understand this might not be the most popular of opinions, but I found it soothing at times. The sound of water bubbling, and my movement through the water, combined with the visuals of my air bubbles drifting away from me with each exhale was kind of relaxing. Probably not what they intended, it is a constant reminder of the fact that you’re very much underwater, and the quiet doesn’t help, so if you have some fears of cave diving, spelunking, or deep water, this probably isn’t the game for you. 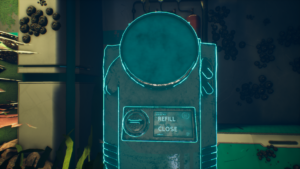 I haven’t finished this game yet, and I understand it to be a rather short game, with about 2-3 hours of gameplay. But I’m a cautious scaredycat, so it is taking me a little bit longer than that. But I am really enjoying the atmosphere, the amount of detail the team put into this game, and the usage of less-is-more in appropriate areas. I love finding the remnants of emails from the people who worked in this facility, and piecing together what happened. It’s not exactly revolutionary, but it is fun. And they’re not dragging out unnecessarily, which I really appreciate. It would be very easy to stretch this out for hours longer under the guise of forcing the player’s mind to work against them, but that can be boring and exhausting. So I enjoy the pace it has set. It’s a good balance for a small game.

And, this is the thing that gets to me, this game is free. Is it perfect? No! No game is. But it’s well-made, has a great atmosphere, and a good balance between suspense, puzzles, and action.

So, why not dip your toes into Abyss of Neptune? 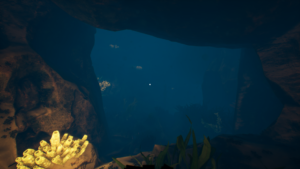