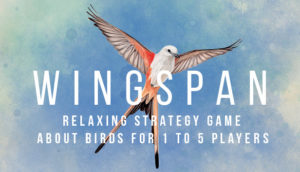 Wingspan comes in two forms a physical board game, which it’s most known for however it is also known for its video game on Steam that simulates the physical game. First off, I’ll read to you the description on the back of the box. “You are bird enthusiasts – researchers, bird watchers, ornithologists, and collectors – seeking to discover and attract the best birds to your aviary.”
Wingspan is a card driven, engine building board game that has a medium level learning curve that is why it is recommended for players aged 10 and up. This game is lavishly designed and produced with brightly coloured boards, over 150 cards with stunning pastel illustrations of birds and habitats alike.

You also have a bird feeder dice tower that you assemble which is simple to do so, custom wooden die, cute little eggs and all the rule-books, appendix and other forms of paper are all this wonderful water proof fabric to protect the integrity of the pack. The game is visually charming, it inspires a relaxing environment and a pleasant state of mind. Wingspan is considered in the top board 10 games of 2020. 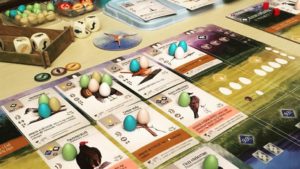 Now Wingspan is a game where you are trying to do one of two things that you determine before you start playing. You could go the points route or the goals route to determine a winner. Points is just how many points can you accumulate from each round from things such as; eggs, bonus cards, cache food, end-of-round goals achieved and tucked birds. If you were to go the goals objective points are less relevant unless those points are to build towards achieve set goals. For example; the player with the most eggs in nests or the player with the most birds in this particular habitat.
The game is played out over 4 rounds each round giving you less turns as you go. Such as first round you have 8 moves, second round 7, third 6 and so on. 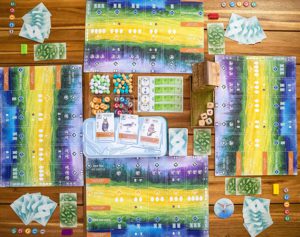 Each player is given a personal player board at the beginning of the game that is segmented into three different habitats; forest, grasslands, and wetlands. Each habitat has their own unique set of abilities and activating a habitat will grant you bird powers such as; the grasslands will mean you can lay eggs; forest is for obtaining food and the wetlands to draw more bird cards.

For every bird you play onto the board they will most likely have their own unique powers. Which is listed on each card. Those unique powers will only be triggered when you either play the bird for the first time or every time you activate that habitat. On each card is also listed the wingspan of each bird, that’s where the game title comes in.

Now there is a lot to get into with Wingspan and the layers of strategy can get quite complex. Maylee and I took about 45 mins to get the initial handle on things before we started playing actual
rounds. We did also find that the rules around how the bird feeder worked a little confusing. I did eventually figure out how it was supposed to work (thanks YouTube). So, my advice is to reference some player tutorials online if you get stuck.

In saying that when you get the physical game inside the box you receive a 30% off the digital edition of Wingspan on Steam. Which sits around $20AUS. I started playing the tutorial in the digital game and it is the exact same game as the physical one, there are no differences other than the platform. The tutorial helped me get a better handle of the game and definitely felt more hands on. Also, the digital game is just as visually stunning and the UI is easy to follow, nothing is cluttered and you get to hear all the bird sounds of each bird you play not to mention cute little animations bringing to life all the cards from the physical version.

Accompanying the digital version of the game is a soundtrack by Paweł Górniak titled My Realm that you can also purchase as a DLC from the Steam store. The music is cinematic, relaxing and filled with wonderful string and wind instruments taking you on an adventure into the wildness. Whether that be in a calming meadow, wondering the grasslands or exploring the treetops Paweł does a wonderful job of transporting you there with this exquisite composition. 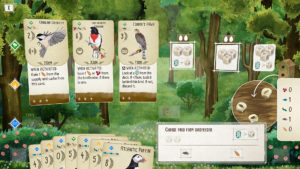 My time with Wingspan is only just starting, as I convince my family and friends to get in on this bird loving action. This game is peaceful, awesomely fun, competitive and invites you to appreciate our natural world. Which is something I think we always need to do.