It’s possible for those two things to be in conflict, but a range of game modes allows you to focus on one or the other. This sequel makes the distinction even more explicit – the original divided its modes based on difficulty, but Audiosurf 2 splits them into mono-colour and puzzle categories. In the mono-colour modes you collect coloured blocks while dodging grey ones, and while you can play for high scores, like “ninja mono” in the original these modes allow you to focus on the experience, to be dragged along wide-eyed while bouncing to the rhythm. The mapping of instrumentation isn’t always perfect, but it’s good enough to feel intimately connected.

The puzzle league modes present multi-coloured blocks worth varying amounts of points – hot colours like red and yellow are worth more than cool colours like blue and purple – and challenge you to collect them in sets of three or more, at which point they vanish from the grid to make room for more. There are various power-ups, including one that repaints all the blocks in your grid, and each sub-mode gives you a different ability, like the option to push blocks left or right. It’s like having a game of Tetris crossed with Bejeweled going on underneath you. That can be a distraction, at least until you grasp the basics. Unlike the mono-colour modes, collecting the wrong block here isn’t a disaster but instead makes you shift your plan, suddenly having to snatch a couple more blocks of that colour or go out of your way to grab the right power-up. It works especially well with slower music.

For a lot of players the idea of combining Audiosurf 2 with slow music seems like anathema, though. The most popular songs, the ones with full high-score charts, are fast-paced dance and heavy metal. Darude and Dragonforce are unlikely companions but both are intense enough to create Audiosurf tracks filled with incident and sudden flourishes of blocks. I find the songs that work best are actually pure pop songs, though. Pop’s cleverly orchestrated rises and falls and key changes map perfectly to Audiosurf, and are more likely to create the corkscrewing tracks that send you barrelling off left and right at the exact moment the chorus hits, everything changing colour in a swirling rush around you that’s so perfect it’s hard to describe.

I’m a music lover, and jealous of people who experience synesthesia – the crossed-wire connections between sensory inputs that result in associations like the ability to see sounds. Playing a song like Kate Bush’s ‘Wuthering Heights’ in Audiosurf and hitting that corkscrew made me feel like I could see sound for a shining moment and for that reason alone I loved it. Audiosurf 2 has refined its algorithm so those moments are even more frequent, which is all I really want from it. Working through Sia’s singles has been wonderful, and the soundtrack to Bastion works well too. 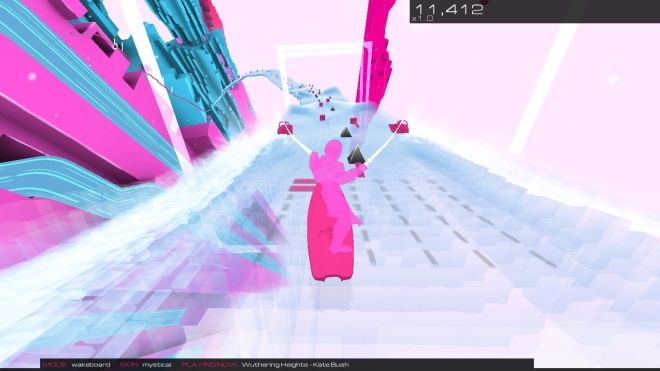 Audiosurf 2 also adds a brand new mode called wakeboard, which is like mono but puts you on a surfboard that can leap off the track, gaining more points for jumping at a peak, and a variety of skins that change the style of its visualisation. One called Dusk turns the track into a highway at sunset, your vehicle into a car, and the grey blocks into the tail-lights of vehicles ahead of you. It transforms the game into a night drive with your own soundtrack, and is an absolute highlight. Thanks to Steam’s mod workshop enthusiastic players have already begun designing their own modes and skins as well, although they are likely to be a little buggier in these early days.

It’s hard for me to talk about Audiosurf and what it does right and what it does wrong. If you love music like I do then the moments when it syncs up perfectly will hit you right in the heart and that’s a feeling that’s difficult to quantify or measure.