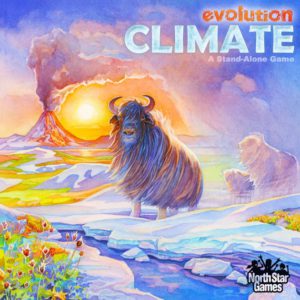 Here we see a watering hole, a source of life-giving water, an essential site in these harsh environments. All sorts of creatures, big or small, must drink water. Unfortunately, that means competition is fierce for the limited resources that are available, and where there is prey… there are also predators.

Evolution is a card-based board game, where you strategise to make the most of multiple mechanics in order to keep your species fed, strong, and numerous. And with a digital version available, and the new Climate expansion that introduces a changing climate, it’s a challenging, but beautiful, experience. For this review, I’ll be focusing on the digital version of the board game. 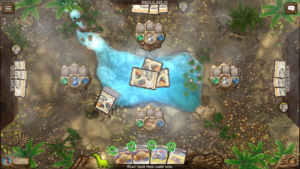 Gameplay and the mechanics are rather straightforward. Your species gather at a watering hole, and there are other species there as well. You must establish a source of food, give your species traits that will help them gather, or distribute food, protect them from predators, or give them the upper hand if things get a bit dicey.

And then, once you make your decisions, you’ll have to watch it all play out, as the opposing species have also made their decisions. You may lose members of your population when the food runs out, or you might come out strong. And at the end of the round, you must use the knowledge you have gained in order to give yourself the upper hand. At the end of the game, points are tallied up based on how much food you consumed, the size of your population, and the number of traits you used. Highest score wins!

It’s actually quite a lot to take in, with the traits you have available, and the multiple stages to each turn. Thankfully, there is a nice tutorial to teach you the rules of the jungle, holding your hand to start with before letting you toddle off on your own evolutionary journey. Which is perfect for me, with every board game I often need a round or two to get the hang of things, and I prefer a tutorial to a written list of rules. But trust me, you’ll be on your own soon enough.

The campaign can be pretty challenging, with new cards and abilities being introduced. You can decide to become a predator, or remain a herbivore. Perhaps you’ll make your species climb trees, keeping them out of danger. And once you’re faced off against 3 other species, you’ll have to learn quickly, and put in quite a lot of thought. But if you feel that the game’s AI isn’t challenging enough, you can take your species online, and face off against real life players, who are interested in driving your species to extinction. Adapt, overcome, survive. And then that brings me to the Climate expansion. Now, you are progressing through time, experiencing vicious cycles of burning heat and freezing ice ages. Now, instead of focusing only on the other species, you also have to take the climate into consideration, using a number of new traits to help you survive, such as heavy fur to protect against the cold, and the nocturnal trait, to avoid the heat. It’s an extra challenge layer to what can be a challenging game.

Now, this is a beautiful game, and it is a digital version of the board game, which has some of the most gorgeous art, in a vibrant watercolour style, that I have seen in a long while. However, they do need to fill in some blanks to translate it to a digital space, and that has led to some inconsistent art styles, and areas of the user interface looks unpolished, especially compared to when the actual board game art is used. And at times there were parts of the tutorial that also lacked polish. But at least when you’re done with the tutorial you’re done. The art… you kinda have to keep looking at it. For the most part you can tune it out, but it’s a bit jarring at times.

The sound experience also feels like it’s been subjected to that same lack of polish. It’s not bad, the music is fine, and there’s some fun little sound effects to compliment the gameplay, but I honestly just put my own music in the background. 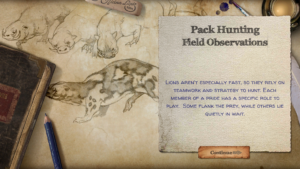 Overall, I quite liked Evolution! It’s nice to have this beautiful, fun board game in digital form, and it lets me play it without having to rely on the conflicting schedules of my friends. The watering hole maps are pretty and dynamic, and when I’m focusing on my next move it’s nice seeing the environment adjust to the decisions being made in game. I did not touch the online portion whatsoever, which I intend to change in the near future. Initially I found it more challenging than I expected, and I had to get into the ‘how to crush my enemies’ mindset pretty much immediately. It’s just that there are a lot of ways to open the game, and a lot of ways for it to play out. Which is part of the fun.

Climate definitely adds an extra layer of challenges, with lots of opportunities for clever strategies, without it being hard to learn. It’s a precarious balance that Evolution has mastered. And it’s a great way to spend an afternoon, or an hour. And I do get a bit of a kick out of turning my peaceful herbivore into a ferocious predator that’ll decimate the opposing populations. But be careful! It’s hard to keep carnivores fed when there’s no one to feed on. Just a little tip from my mistakes.