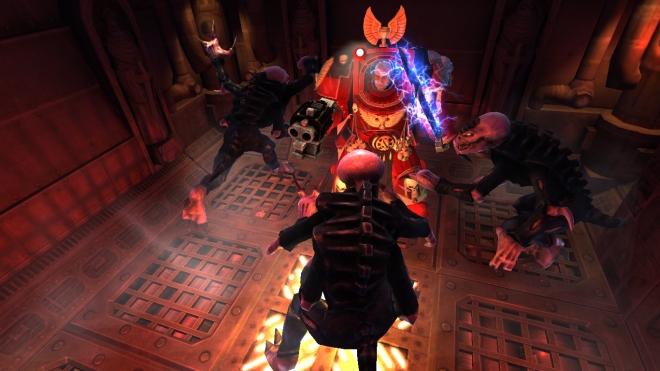 The original Space Hulk was a board game about hordes of aliens fighting stoic Space Marines, but not the regular kind of Space Marines we’re used to seeing – those boring thick-necked heroes of every second video game ever made. Space Hulk is part of Games Workshop’s Warhammer 40,000 universe, where the Space Marines are genetically engineered monks who wear armour covered in religious icons and superstitiously pray to machine spirits when their guns jam, and the hulks they fight on are the ghost-ship remains of craft lost in faster-than-light jumps that come back full of four-armed, hunchbacked creatures called Genestealers. It’s what Aliens would be like if James Cameron was a teenage goth who read 2000AD comics.

There have been other video games based on the board game, but this is the most faithful recreation: turn-based and with a display that lets you know what the dice rolled every time you shoot. You command Marines who lurch down dark corridors, spending action points to open doors and take pot shots at aliens, trying to keep some points spare at the end of your turn to go into overwatch so you can shoot on the aliens’ turn as well. If that sounds like X-Com: Enemy Unknown, that’s because it is.

Like in X-Com you never have enough of those action points, because if you did you wouldn’t be able to enjoy the delightful agony of trying to figure out who you can afford to put in overwatch. Each turn you get a random number of bonus command points, which can be spread around your squad as spare action points, but they’re also worth saving because they’re the only way to clear guns that jam – this only happens when you roll doubles, but you’ll inevitably wind up watching this happen four times in a row while a Genestealer gets closer square by square and you curse the probability spirits. While moments like those might make you sweat, this version of Space Hulk doesn’t have much atmosphere. The 1993 version wasn’t as faithful to the mechanics of the board game but it had more of its mood – you could hear Genestealers growling even when their blips weren’t on the map, and each Marine’s view was displayed across the top of the screen, reduced to buzzing static as they died one by one. The Space Hulk of 2013 doesn’t have the same intensity, which isn’t helped by a narrator who wishes he was James Earl Jones but keeps putting emphases in the wrong spots, no cutscenes beyond the intro, and limited animations. You’ll get sick of seeing the same silly deaths, aliens surrounded by sudden globs of red or Marines falling to slashed lines that appear in mid-air.

Some of the atmosphere returns in multiplayer, with both a shared-computer ‘hotseat’ mode and online. Being outmaneuvered or getting the drop on a human player is more satisfying; manage to do something clever and you’ll want to punch the air in a way single-player doesn’t deliver. But waiting for your opponent to finish moving, especially if they haven’t realised you don’t have to pause as each Marine finishes stomping down a corridor before moving the next (and won’t read your patient, sensible, not-at-all-furious explanation in the chat window), is painfully dull.

Blood Bowl, another of Games Workshop’s board games, was made into a video game in 2009 that stuck closely to the rules of the original but delivered them through an opaque, clunky interface that took a lot of effort to get to grips with. Space Hulk is a smoother experience than that, even having an undo button like every turn-based strategy game should so you don’t fail an entire hour-long mission just by misclicking. But it could have been more than just a decent translation of a board game onto your computer – it could have had maps that weren’t possible to make out of cardboard tiles on a flat table, a campaign from the alien’s point of view, characters with more personality than figurines, a better introduction to the setting. It could have had ambition.

As well as lacking ambition it’s missing a couple of promised features: a co-op mode and a level editor. Both will apparently come in later patches and, to their credit, the developers have been steadily fixing the bugs Space Hulk suffered from at release. But these things add up to a feeling that it isn’t quite finished. In a few months (especially once players get hold of that editor and start creating their own campaigns), it might be a completely different game, and one that’s easier to recommend.