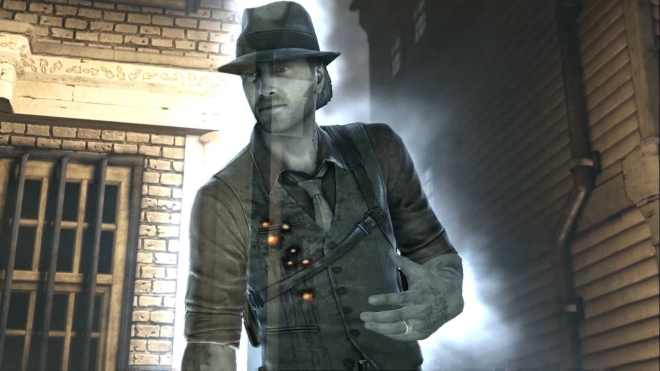 My favourite thing about Murdered: Soul Suspect is the cigarette. The main character, Detective Ronan O’Connor, has this hip bartender look: trilby, waistcoat, tattoos, stubble, nicotine addiction. I’m pretty sure he sold me a Corona once and was polite enough not to sneer. But he’s dead now, and also a detective – a ghost detective who has to solve his own murder before he can move on. Since he was smoking when he was attacked he’s still smoking now. At a couple of dramatic moments he flicks that ethereal ciggie away and moments later it’s back in his mouth again, eternally half-finished. Just like he’s stuck wearing that hat until it comes back into fashion, he’s stuck with that smoke, which is maybe a commentary on addiction or just a cool little detail in a game that’s full of them.

Here’s another one. It’s set in Salem, Massachusetts, the town still infamous for its witch trials of over 300 years ago. The locals must be as sick of everyone bringing them up as Australians are of convict jokes. Being a religious place, all Salem’s buildings are consecrated, meaning ghosts can’t cross the thresholds and Ronan has to wait for someone to open a door like a cat who wants to be let in. Many of the town’s old structures have left ghosts of themselves behind as well; you’ll see burning spectral ruins where an old house caught fire, or an overturned cart in the middle of the street. The consecrated walls and ghostly leftovers force you to be creative in crossing town from one crime scene to the next, and also happen to look great. The old Salem overlaps with the new like the scabs of history refusing to heal. Murdered: Soul Suspect takes the crime scene investigations from L.A. Noire but thankfully none of the rest of that game. While tracking the serial killer who did you in you’ll ghost your way through walls (interior ones, anyway), peering at evidence and also the emotional residue of evidence thanks to your ghost powers. You can also possess witnesses to read their thoughts, and subtly influence them to bring memories of what they’ve seen to the surface. It’s the kind of clue-hunting inherited from adventure games, and unfortunately Murdered: Soul Suspect also inherits their fiddly hot spots for activating those clues. You’ll be staring right at something but the “press X” prompt won’t appear until you walk away and then back a different angle, sometimes repeatedly.

(I’m playing on PC but switched to controller because the mouse controls are too sensitive, but without any way to alter that in the settings.)

After investigations you’re often under threat from ghosts who’ve gone bad. Trapped for too long in this halfway afterlife they’ve turned demonic, become cowled wraiths who float around making obscene dragging motions with their hands while hunting for other ghosts to consume. They can be stealthed past by hiding in traces old spirits leave behind, glowing blue spots of their presence that dot the town, or they can be defeated by attacking from behind in quick-time events that are sometimes a bit fiddly to engage. Still, they make for a startling shift into horror in the middle of the cosy mystery. (Although whoever decided it was OK to not put uniform autosaves right at the start of these segments is a doofus.) When you’re not sneaking or poking stuff and going “hmmm” there’s a hub to cross, the town’s night-time streets full of oblivious people and moping ghosts. The dead are much more interesting than the living, and side missions let you help solve some of their deaths so they can move on – in a nice touch Ronan is just a decent guy who helps people because he can rather then because there’s a reward in it – and there are also collectables. A lot of collectables. Each location has a set that can be completed to unlock a spooky story narrated at you by a clumsy voice actor, as well as others that add to the history of the characters and their town. Sometimes it’s necessary to possess a cat to get to certain collectables and that’s a cute change of pace – there’s even a ‘meow’ button, which is up there with Transistor’s ‘hum’ button for pointless additions that are nevertheless fun to play with.

A mystery needs a good payoff though, and Murdered: Soul Suspect doesn’t deliver that. Sometimes you’ll be shown clues you’ve collected and asked to highlight the most relevant ones so Ronan reaches the right conclusion, and if you’ve played a Phoenix Wright game you’ll know how that can go wrong. You may have figured out what’s going on but explaining that to the game is another matter. It wants you to show your working like a maths teacher who thinks you’re cheating. And after following a leisurely pace most way through its 10 hours or so – even when Ronan says “We only have 15 minutes to get to this witness!” you can hunt collectables to your heart’s content before finding her – suddenly a timer appears during the climax and you have to use those fiddly hotspots in a rush to save the day or repeat the whole final chapter again.

Murder mysteries are all about building up to that final showdown in the accusing room, and although there are plenty of neat little details in Murdered: Soul Suspect the big picture doesn’t pull together at the end.  You want the kind of resolution that makes you reconsider the whole thing based on what you’ve learned and – without spoiling its twists, some of which are clever and others obvious – that’s not what you’ll get here. It’s close, but it’s got unfinished business and shouldn’t have gone into the light just yet.