Garbage disposal and management is a problem that has plagued us for years, and it continues to be a problem far in the future, on a planet far, far away. Hundreds of ships dump their rubbish on some far-off desert planet, leaving bags of waste, plastic lawn chairs, and who knows what else.

And you, the newest hire, are tasked with solving this eternal problem: how to make all this trash go away?

Trashed is a strategy game about garbage management and disposal. With a chunky, 3D artstyle, your long flowing blue hair, and more than a few guns under your belt to take care of some problems you might run into, this is definitely a game meant to challenge you. And maybe overwhelm you, just a bit. 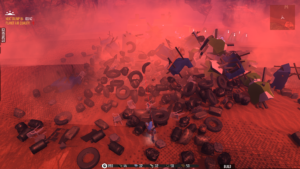 So, the main goal of Trashed is to dispose of garbage, and manage the waste and pollution it causes. A ship will come by about once every minute (or an in-game hour) to dump rubbish at a marked site. This can very quickly develop into a gigantic pile, with garbage bags just rolling all over the place. You need to move that garbage into an incinerator. You have a helpful robot that manages to push some bits of trash into an incinerator, and you can pick up a piece of garbage, and toss it in yourself. But you will not be able to keep up. And each bit of rubbish burnt will affect the air quality.

Thankfully, you have more than a few tools to help you out. As you earn money, you can buy a garbage blower, to move several pieces of rubbish, and blueprints to build more incinerators, air purifiers, solar panels, batteries, recycling machines, grinders (for the giant pieces of garbage that will get thrown onto your head by yet another ship), and more, including conveyor belts, which quickly became my favourite thing in the game.

In addition, you progress by picking up bounties from the office, requiring you to process a certain amount of garbage, or to kill some of the local creatures who will rock up to cause some trouble.

Of course, you can purchase various weapons to help you.

It’s addictive, it’s satisfying to optimise your dump site, to set it up so you only need to worry about some wayward rubbish. There are cutscenes with voiced characters, for some reason they’re all from Texas. I named my helpful robot Marvin. I love him. He gets stuck sometimes but he’s doing his best. 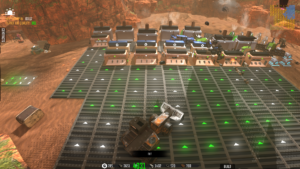 The music is pretty minimal, and there is a lot of silence in the game. The creatures I run into make some weird, alien-like sounds that makes me a bit nervous to hear. The sound of the ship arriving is overwhelming, and I’m glad to hear it go (mostly so it stops making a mess of things). It’s really satisfying hearing the constant sound of garbage being recycled and burnt, it tells me things are working. More music would be nice, but I find myself zoning out a lot, so I’m not too bothered.

There is one thing to note however, this game is in early access, and at the time of writing this review, in pre-alpha. There are a lot of bugs, there is only a portion of the planned content in the game, and I wasn’t able to actually complete the tutorial. My playthrough could be described as playtesting. This is not a finished product. But the content it already has, and the gameplay so far, is enjoyable. When I get past some of the worst bugs, and I get used to the rough controls, I found myself playing for hours. I had a playthrough where the bounties glitched out, so I couldn’t progress through the game, but I had so many conveyor belts, and you have never imagined air could be so clean.

I am looking forward to seeing this game continue to develop, and to revisit it over time. And I can’t wait until the team goes ‘Yup! That’s a finished game!’. Because my heart needed a garbage management game that takes place on an alien planet.