A Riot employee has posted a video of sexist harassment while playing Valorant.

Valorant is still in its testing phase however still manages to sustain harassment within its player base. Riot is no stranger to this type of behaviour such as League of Legends. Riot’s UX designer who goes by the handle Greenily posted on Twitter a video of her time in solo queue on Valorant. The video shows another male player saying he was looking for an ‘egirl,’ pretending she was his girlfriend and after she told him to be quiet began calling her slurs. Greenily wrote on Twitter, “My dealings are not just constrained to this single clip. This is since I’ve ever played online games. And for the record yes, I muted him. Does that mean he won’t go making other people uncomfortable though? No. If you’re in one of these parties, please help speak up and report these people. Because I hope this is not the kind of community you want to be playing with.” Hopefully Riot act quickly before this type of behaviour takes root within the game. 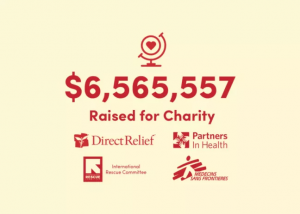 The gaming world does what it can to raise funds for COVID-19 relief.

Bethesda is intending to donate $1 million to both local and international organisations working on the front line fighting the pandemic. Bethesda are also offering fans game opportunities to chip in as well. $250,000 will be going to UNICEF, $250,000 will be donated to local relief efforts within communities and $500,000 will be given to Direct Relief who also recently received $400,000 from the Corona Relief Done Quickly speed running showcase. Humble Bundle also out played themselves with raising over $6.5 million through their Humble Conquer COVID-19 Bundle. They sold over 200,000 bundles with 100% of the money raised sent to Doctors Without Borders, Direct Relief, Partners in Health and International Rescue Committee. Doctors Without Borders said, “We will receive close to $1.5 million in donations, which will enable our teams to launch emergency programs to help stem the spread of COVID-19 in the hardest hit communities, care for infected patients, and respond to the pandemic’s consequences on local health systems.” Not long after Last of Us 2 story leaked online so does roughly 25 minutes of Cyberpunk 2077 gameplay footage. Don’t worry we won’t reveal any spoilers, the videos aren’t in English and seem to be recorded from a closed gameplay session from E3 in 2019. In saying that the spoilers for Cyberpunk 2077 are no where near as the same level of content as Last of Us 2. Links to both games footage are floating around Twitter and other social media platforms so be careful not to look if you are trying to avoid spoilers.