Mortal Kombat 11 has had its fair share of fun DLC so far including Rambo, Robocop, The Joker, Terminator and Spawn but its latest offering takes us back to the infamous Mortal Kombat film of 1995. The Klassic MK Movie Skin Pack includes alternate skins for Sonya Blade, Johnny Cage and Raiden based on the actors that portrayed them in the film, Bridget Wilson, Linden Ashby, and the legendary Christopher Lambert respectively. Their likenesses aren’t the only inclusions however as each actor has also recorded new voice lines.  The DLC pack is out now. 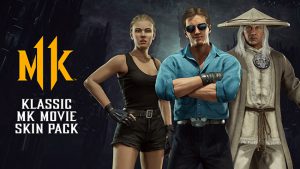 Famed magician, self-proclaimed psychic and spoon enthusiast Uri Geller has given Nintendo his blessing to reprint Pokémon cards which featuring the character Kadabra. The production of cards came to a halt back in the year 2000 when Geller filed suit in multiple courts against Nintendo for infringing on his image with the design of Kadabra. The Pokémon, also known as Yungerer in Japan, is a powerful psychic that brandishes a spoon. Posting on Twitter Geller has apologised for his prior action:

I never realized how powerful and important it was for me to lift the ban on Yungeller/Kadabra, especially for all the kids around the world!

The Last of Us TV series is going ahead

HBO has given the greenlight to the TV series adaptation of Naughty Dog’s The Last of Us. Series creator Neil Druckman will be working as writer and executive producer along with other executive producers Craig Mazin and Carolyn Strauss who both recently worked on the critically acclaimed Chernobyl. While still in the early stages of production the official synopsis seems to indicate the series will be starting with the story from the first game.

Both Cuphead’s final DLC (The Delicious Last Course) and Watch Dogs: Legion’s multiplayer mode have been delayed into next year. Cuphead’s developer Studio MDHR has stated the challenges of development during the COVID-19 pandemic as the reason for the delay while Ubisoft has noted issues dealing with ongoing bugs in Watch Dogs.

In announcements, Fall Guys has announced their new season Winter Knockout to be released in the second week of December and will feature something called “Ringus Dingus”.

OMORI the Earthbound styled JRPG with art by Omocat has just got a release date over six years after its Kickstarter concluded. You’ll be able to see if it was worth the wait on Christmas day.

Red Dead Redemption 2 has just launched a standalone version of its online multiplayer. It launched on PC and consoles with an introductory price of $7 which will increase after February 15 next year.