So there’s a story mode in which Bats and the rest of the Justice League – Superman, Wonder Woman, Cyborg, etc. – have to defeat and then team up with Earth’s villainous Legion of Doom – Joker, Lex Luthor, Cheetah, etc. – so that together they can save the Earth by travelling to the Lantern Worlds and doing something vague that involves multi-coloured beams of energy flying around in a climactic way and then save the day. The highlight comes halfway through when Brainiac shrinks several of the Earth’s cities, represented by having them built out of scaled-down Lego blocks you can stomp through like kids in Legoland models of London and Paris.

But even more so than usual, story mode is just a thing you have to slog through (or get your parents to slog through) before you unlock free play and all the good stuff. The flying sections are side-scrolling spins around circular spaceships, and feel half-hearted compared to the space sections of Lego Star Wars, and there are none of the stealth or chase sequences Lego The Lord Of The Rings was full of. Story mode is all about punching Lego things apart so you can rebuild them into different Lego things you need to pass whatever’s gating the next area or cutscene (some of them barriers you could just fly over if it weren’t for the invisible walls everywhere). The fun’s in free play mode, which is all about exploration and experimenting with superpowers like the Atom’s shrinking and Plastic Man’s stretching.

To give Lego Batman 3 a sense of cosmic scale, between levels you can teleport from the Batcave to the Hall of Justice, which leads down to the Hall of Doom and up to the Justice League’s satellite, the Watchtower. There’s also a moon base, and all six Lantern Worlds can be unlocked and revisited. Each planet’s a sphere the size of a basketball your tiny minifigs traverse like they’re in The Little Prince or Super Mario Galaxy, though most of these planets are unfortunately just different-coloured versions of the same thing. You arrive and Daffy Duck, dressed as a Green Lantern (it’s a whole thing), offers you a tour. Then you discover almost identical sets of sidequests and puzzles that earn you bricks and unlock new characters. Only Oa, the green world, feels different, apparently being the centre of the universe’s racing circuit. 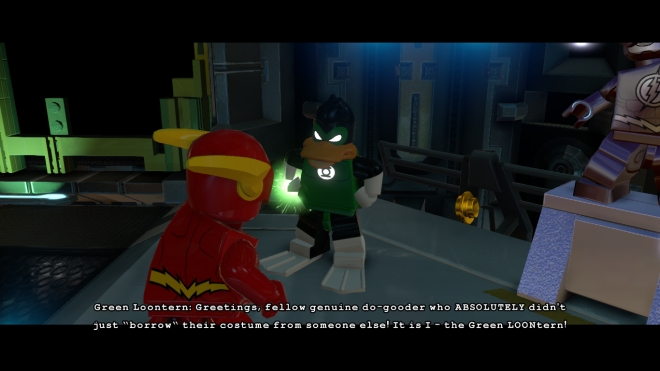 Lego Marvel Super Heroes had an open Manhattan to explore, with minigames and all the rest scattered across it like decorations on a generous cake. Lego Batman 3 replaces that with connected hubs, many of them samey and redundant. There are trophy rooms in both the Batcave and Watchtower, and both contain places where you can make your own mix-and-match characters from all the heroes you’ve found, but trying to find the place where you can spend money on unlocking the powers of the special red bricks means running back and forth through various rooms. The Flash became my fallback character not because I like the dude but because he’s the fastest.

While you’re doing that, a Lego version of Conan O’Brien makes weak jokes about each room you visit, on an endless loop. Yeah, I don’t know why either. I’ve never wanted these games to return to their roots in mime until now, but Conan O’Brien – a guy I normally find funny – made me long for those silent days. He’s not the only celebrity cameo in Lego Batman 3, but he’s the worst. And this is a game that features Kevin Smith. Adam West also appears as himself, needing to be rescued in each level like Stan Lee was in Lego Marvel Super Heroes. But the real reason he’s here becomes apparent when you finish the story and discover a bonus level that’s an homage to the 1966 TV series he starred in, complete with Batpoles to slide down, an Atomic Pile powering the Batcave, and THWOK and ZLOT sound effects accompanied by horn blasts when you play chin music with henchmen. It’s hilarious, hitting all the beats and references you expect with glee. I wish the entire game was as riotously fun as this bonus level, but sadly it’s not.

Being able to play as Wonder Woman (her theme music starts whenever she takes to the air) and Ace the Bat-Hound (who can dig up buried objects) and even the DC version of Frankenstein (it’s a whole thing) is neat and all, but Lego Marvel Super Heroes did most of what Lego Batman 3 does and did it better. 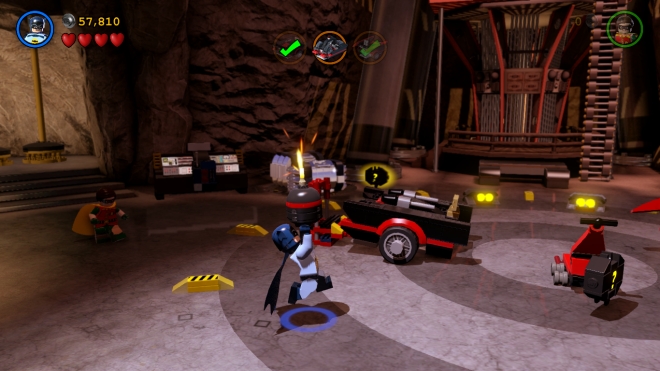