Mutual orbit, spinning out of control.

Milky Way Prince is a unique visual novel game about abuse in relationships, mental illness, and intimacy. With a combination of 3D environments and 2D characters, with a simplified colour palette, it is beautiful, haunting, horrifying, resulting in an experience that has left me thinking and feeling, mind turbulent.

I won’t go into detail in this review, but the game does delve into emotional abuse, self harm, suicide ideation, and the difficult ugly sides of mental illness. It’s rough. I had to take breaks between chapters to go hug my cat. But it is a beautiful game, it explores these themes in a way that was unique, thought-provoking, and jarring.

In Milky Way Prince, you play as Nuki, a young man with stars in his eyes, obsessed with the stars that litter the night sky. You learn of a fairy tale, where a prince from the stars falls to Earth. A beautiful romantic tale.

Nuki spots a falling star in real life, and follows it to find a man who is crying. He is Sune, and this is your first meeting.

What follows should play out like the fairy tale. And in a way, it does. But the brightest stars are the most unstable, and as beautiful as they are, to get too close is to invite disaster. But like a moth to a flame, Nuki is drawn.

He has stars in his eyes, and Sune is his prince. 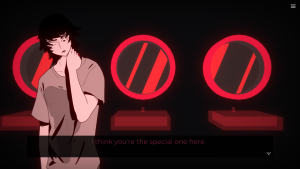 Most of the game functions like your standard visual novel game. The characters have some conversations, and you are able to select dialogue options to respond to the situation. There aren’t any wrong responses, but they change how the game plays out. Whether that prevents catastrophe, destroys you, or otherwise, it can be hard to tell with option will lead to which conclusion. And that’s kinda the point of the game. Sometimes, in life, and especially in abusive situations, there aren’t any safe responses, there aren’t clear ways out, and there aren’t tidy resolutions. Sometimes, all you can do is react.

In a binary system, orbit is mutual.

At times, the game throws you into high-stress situations, where you experience an impending explosion, and you have to defuse it before it happens, a dozen times over. There are moments where the game will make you jump with how quickly things can change.

You are kept on edge, uncertain, afraid, but wanting to push forwards, to push through. To help Sune. The music is of the electropop variety, and it can be quiet at times. But even the music will lash out at you, throwing sound at you, lending an auditory punch to the visual hit. When things are calm and good, the music is nice, pleasant, kind almost. But when things are bad, when the situation is spiraling, when you watch Sune fall apart, it becomes painful, attacking your senses, overwhelming you. I became very stressed and anxious when I heard those discordant chords.

At times though, the audio is overdone, and it does become almost comedic. Sometimes it’s just not necessary, and just becomes annoying. Not in a good, adding-to-the-experience way. But in a ‘I am now clicking as quickly as possible to make that sound stop because it sounds like a rubber balloon’ way.

Overall however, the game is jarring, it is beautiful, it is horrifying, it is frustrating, it is a lot.

Many people are aware of mental illness, and what it can do to the person. It can be exhausting, difficult to understand and explain, hard to live with. It can be managed, with the hope of being able to thrive one day.

But a lot of the time, it can be ugly, destructive, not just for the sufferer, but also for those around them. Those people can remove themselves from it at least. But what happens if you don’t? If you don’t understand? If you’re poorly equipped, unprepared, and if the person with the illness doesn’t want your help?

What happens when two stars are locked in orbit? When those stars spiral out of control, closer to each other?

One of the features of the game I really appreciated, after feeling like I just wanted to grab Sune by the shoulders and shake him, was that you can experience the game from his point of view, for a little while. You see through his eyes, see his thoughts, his reasoning, his logic.

You begin to understand. 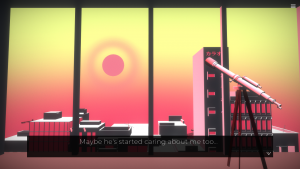