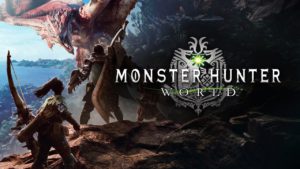 Monster Hunter World is the fifth instalment of the Monster Hunter series. For those of you who haven’t heard about Monster Hunter you play as a hunter that you can customise that is tasked with hunts to either kill or trap monsters that roam certain environmental landscapes. The idea usually is to kill them, harvest materials and use those materials to make new weapons, armour and other unique game items. You also have a friendly little side kick called a Palico which is an anthropomorphic cat that you can also name and customise that will assist you in combat. There is also your assistant Handler whose job is to keep you up to date with all your objectives and educate you on how the New World works.

In Monster Hunter World you start as part of the fifth fleet which has been called upon by the Research Commission to provide more back up to previous hunters in the New World. The major focus of the journey is to perform Expeditions into new environments to study Elder Dragons, which are very powerful monsters that play a big part in the ecosystem or each new area you discover. Early on in the story you learn that these monsters migrate to this New World every ten years in an event known as Elder Crossing. During the first initial cut scene on the ship to the New World you encounter Zorah Magdaros who is an Elder Dragon moving towards your destination. Throughout the rest of the main narrative, you are to discover why they migrate and what part they play in the ecosystem of this New World. 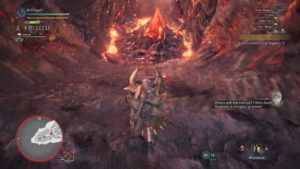 There are many twists and turns ahead should you take on this perilous journey, and if you should feel afraid do not worry Monster Hunter World is very big on multiplayer cooperative hunts. You can post a quest and other hunters can join you or you can join a quest that other players post. Not to mention loads and loads of optional side quests, special events and wonderful game cross overs; such as Geralt of Rivia or Mega Man. Also, once you finish the main quest line and hit the credits there is still more monsters to discover and challenges to face. The game almost seemingly never ends even after 50 hours of gameplay. 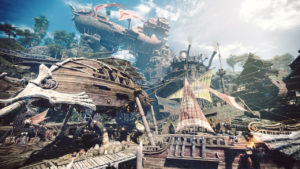 Something incredible about the Monster Hunter series is the impressive number of weapons you can choose from and you don’t have to be locked into specialising in one. There are 14 to choose from ranging from close combat, mid-range, high mobility, aerial, rapid fire, long ranged and versatile. I originally started playing on a Charge Blade which has to be on the most unique and if not most complicated weapons to master however provides insane damage once you reach the high hunter ranks. It has a couple of different modes such as it looks like a small sword and shield however you can combine them together to form a large axe that you can charge with power to deal massive blows. I later learnt the bow and arrow because some monsters fly and learning a ranged weapon definitely helps with certain hunts. Honestly one of the best parts of the game is enjoying a range of different weapons that can completely change the game play as well as the outcome of monster fights. I highly recommend learning more than one weapon.

The best, if not most incredible part of Monster Hunter World is the monsters themselves. They are fascinating, visually exceptional, diverse and extremely dangerous. Some of them are so hard that you definitely need a full team of hunters to take it down and some can be an hour-long grind. There are moments of such beauty for example during fights you have these scenes of incredible high-definition beasts up against these incredible environmental back drops that are simply jaw dropping. There is one particular hunt against an Elder Dragon where you are set in the volcanic pit with a what looks like a giant flying lion that explodes these incredible red and blue flames. Honestly there is nothing like it. 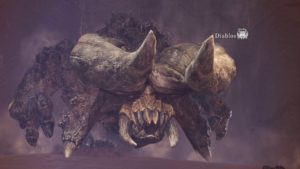 I should also mention the comradery of multiplayer hunting. Most of my time with Monster Hunter World has been cooperative, myself and some of the Zed Games team helped me climb in rank and experience by hunting together. There is so much fun to be had testing out different weapons and taking on different monsters all over the New World. Something that Zahra mentioned to me was, “Every hunt is different, even if it’s the same monster you fought before you are guaranteed to have a different experience the next time you’re out there.” Seeing massive fights between two different monsters or having your party crashed by an unwanted visitor is always a good opportunity to get the hell out of the way and see something new, maybe even try something new.

A quick tip for players interested in playing Monster Hunter World on Windows PC is get yourself a controller that is compatible, usually Xbox controllers wired or Bluetooth will work nicely. You can play using keyboard, however, depending on your weapon you might find your fights to be more challenging. On a personal level I find the controller to make to experience more immersive. 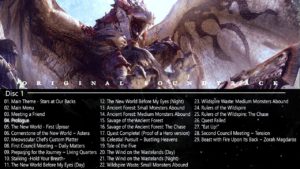 Akihiko Narita is the composer for Monster Hunter World and has created much of the soundtrack for many other Monster Hunter games as well as Resident Evil 5. His compositions are epic in nature, making everything feel like this grand adventure. There is mystery and suspense as well as fear and darkness. The orchestral tones and rising string sections of the music gives your heart a good stir especially when you’re fighting a Diablos. Speaking of Diablos this monster has some of the best sound effects, tunnelling underground and exploding up from under you. There’s the sound of monster roars that stun you in battle, some of these guys are pretty terrifying. 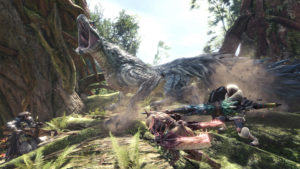 All in all, Monster Hunter World is extraordinary. It’s not my first Monster Hunter game and it certainly won’t be my last. If you are unsure about the soon to be released Monster Hunter Rise don’t be afraid to go check out this one instead. Plus, there is a massive expansion Iceborne should you love it as much as I did. To give you an idea of how resoundingly positive Monster Hunter World has been received internationally the lowest score it’s had was an 8/10 and with overwhelmingly positive reviews on Steam you are bound to find something you love. Are you ready to depart on your quest hunter? I am.