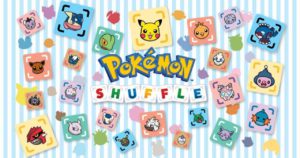 Pokémon Shuffle is a puzzle game similar in its mechanics to Candy Crush or Bejewelled. Players must battle against different types of Pokémon. During each fight you may bring up to four support Pokémon with you. Here comes the match thing with other thing mechanic, you must match three or more of the same Pokémon to each other, either in horizontal or verticals lines when that happens damage is dealt to the Pokémon you are battling. The higher number of Pokémon you can match in a single move the more damage you deal and the faster you knock out the wild Pokémon. It also helps if you can have support Pokémon that are super effective against the Pokémon you are battling. For example, bring water types to battle a fire type will deal more damage. You progress through each stage by defeating Pokémon and capturing them. You have a higher percentage of capture at the end of each round based on how many moves you have left. There is a limited number of moves you can make for each battle. So, if you have 10 moves and you KO’d in 2. Those left over 8 moves will be added to your likelihood of Pokémon capture. And that Pokémon can be added to your collection and brought with you to other battles. After all that you get in-game coins and Pokémon gain EXP. All the Pokémon in Pokémon Shuffle are from Kanto, Johto, Hoenn, Sinnoh, Unova, Kalos and Alola regions. Meaning that there is also Mega Evolutions and Mega Stones that you can acquire from battling trainers as well. Players can unlock expert levels as well. Which will limit you not only by move count but also by time. The Pokémon up for grabs in the expert levels are more rare and definitely more sought after. Pokémon Shuffle operates on a free-to-play system which basically means that everything is free up front but if you want addition features you must pay. In relation to Pokémon Shuffle, you are required to have hearts to attempt a stage. Now you only start with 5 and you must wait a certain amount of time for one heart to recover and so on. You can purchase more hearts and you can also purchase power-ups, such as extra moves. Mostly however if you didn’t want to pay you don’t need to you, you get login bonuses and daily challenges as well as special limited-time stages to try out.

Pokémon Shuffle is very cutesy in its art style making my think of Animal Crossing there is also a childlike nature to it making it very safe and appealing to young kids. I do find the game to be very repetitive at times and other times I find it really addictive making me want to reattempt a battle to capture a Pokémon. The further you get into Pokémon Shuffle the more patience you need to not spend money. So, if you are someone with the tendency to spend on mobile games, I’d be careful with this one. The soundtrack is simply delightful each stage you progress through provides a new sound for each stage theme. It’s almost as if each stage has music to mimic certain Pokémon types which is really cool. There are also many traditional Japanese instruments throughout with classical Japanese drums and rhythm. There is also sweet melodic guitars and ukuleles to enjoy. Tsukasa Tawada has done a fantastic job of making gaming music that does what it should, set the scene and not irritate you when it loops.

I have to say even though Pokémon Shuffle doesn’t have the greatest online ratings and despite it being a pretty old game now, I don’t think it’s aged badly. I love Pokémon and almost any game that somehow incorporates that universe will suck me in. It’s definitely a great game for the train or to fidget with. I love the daily login in systems because it keeps me going in to attempt some more stages and if you want to spend money sure and if you don’t want to you don’t have to. I’ve had a great time with Pokémon Shuffle because I got the itch for having to Catch Em’ All.