You have grown tired of your life, and your uncle has offered you an opportunity. He once ran a farm you see, but he discovered a wondrous creature called Planimals. And as a man of science and botany, he has taken it upon himself to study these creatures. Planimals come from a fusion of slimes applied to growing plants, bringing them to life much like birds and possums. A town has sprouted around this discovery, leading to a lifestyle adapted to these Planimals and slimes. Slimes can be used as a form of energy, and the Planimals can fight for you, act as livestock, and are a loyal companion.

Now, it may sound kinda familiar, but Monster Harvest is a hybrid meant to fulfill a niche. A cute, pixel game, you have to restore your uncle’s farm, uncover the mysteries of this town, the slime, the Planimals, and the menacing group that seems hellbent on making sure you don’t know what’s going on. Monster Harvest at its basic is pretty straightforward. Grow plants, fight slimes. Use the slimes on the plants and you’ll grow Planimals! And depending on the type of slime used, and the plant you apply it to, you get a variety of Planimals.

The one you’ll encounter first are Planimals that will fight for you. You can create a party of them, and explore the dungeons with them. You’ll encounter dangerous Planimals in there, but with a bit of strategy, you’ll defeat them, finding resources and treasures.

You’ll need to focus on farming in order to maintain your Planimals, and the fruits of your land will provide you with income. Essential for upgrades, new buildings, and new gear and seeds to grow, leading to new Planimals to discover.

You can also combine slimes together to create more powerful slimes to apply to your plants.

The battle mechanic is pretty straightforward, try to attack the enemy Planimal first with your sword and you’ll get the first hit in with your own Planimal. Once engaged in battle, you’ll have access to some attacks and abilities that you’ll use to fight. If your Planimal is knocked out, you get a resource from their… soul? Life essence? That you can use to upgrade the soil of your farm, allowing you to grow more powerful Planimals. But if your Planimal survives the battle, they’ll gain experience and level up. And you can continue through the dungeon, finding more ore and resources, and stronger Planimals.

Other townsfolk have also raised Planimals, and every Friday you can go to the recreation centre and battle townsfolk, raising your own rank within the town.

So, it sounds pretty solid. And I was interested in the concept, as Monster Harvest combined genres I enjoy. But it’s not doing it well.

The mechanics I described aren’t especially robust. Farming is fine, although the drain on my stamina is quite frustrating. Crafting recipes are unlocked as you level up, and to level up you need to farm, fight, or forage. And the stamina usage limits how much progress you can make. Granted, as you upgrade your gear, and earn enough to buy stamina potions, it becomes less frustrating. But it still takes a while to unlock crafting recipes that are actually helpful. It is fun unlocking and building new buildings, and planting as many seeds as I can afford, and seeing what Planimals I get throughout the seasons.

Battles… aren’t exactly exciting. You have one move unlocked to start with, and whoever wins depends on who strikes first. There is a bit of RNG, and some status effects to keep track of, but you’ll have to do that in your head, because there isn’t really a good UI. Oh no I’ve been poisoned! But I’ll have to remember that, I won’t get a little post-it note. You can’t heal your Planimals unless you sleep overnight, and you can’t switch Planimals around or run away in a battle.

I do absolutely love that the two top members of my Planimal party will walk around the world with me, following my character around.

But my biggest frustration is with the UI, and how this game communicates important things with the player. There is a tutorial… kinda. It just dumps EVERYTHING on you in one go, and you just have to remember that. And there’s not a way to revisit any part of the tutorial. There’s a device that I know I can put things into, but I have no idea what exactly I can put into it, and when I try it just tells me I can’t put this item I’m holding in.

There is a calender and I know that there are festivals. I’ll walk into town and its decorated for… something. And I can’t go into the dungeons while there is a festival. My uncle says I should go enjoy the festival. But I can’t find anyone or anything to do during these festivals. I wander around everywhere aimlessly before giving up and calling it a day.

I think I’m supposed to be able to cook, I can buy salt and sugar for cooking. I have no idea how to cook. And food would be so helpful for my stamina.

There’s a little clock icon at the bottom of my screen, right above my toolbar. It’s not a clock. Not a useful clock. It’s just there for decoration, which took me a while to figure out because it is animated. But it doesn’t mean anything.

And it’s kinda ugly. The game is quite pretty, but the way the user interface is designed is clunky. The font doesn’t fit, literally. Parts of the bars are hidden behind the decorative frames. Navigating my inventory is a pain, it seems to glitch out sometimes, the highlight square doesn’t fit, also literally, and while I play primarily with a controller, I switch to my mouse to move around my inventory and chests. 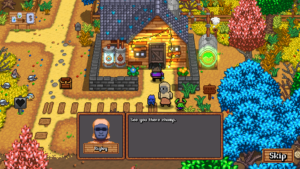 Music and sound is repetitive, painfully so. The pop sound from picking up things is satisfying, and it can be eerie to hear Planimals making their weird sounds in the distance, but the music is a very short loop. The audio experience means nothing to me except something to numb my mind. I put it on mute and listened to a podcast instead, which actually helped me stay focused enough on this rather shallow game.

I wanted to like Monster Harvest. I like the genres, and it’s quite a pretty game. I could play farming games for days, I love raising a party of creatures to bond with and work with. And Monster Harvest is those genres, it does deliver these things, but in an extremely unsatisfying manner. The entire time I was playing I just kept thinking of other games I could be playing instead.

Nothing grabbed my attention, I wasn’t invested, losing my Planimals didn’t really matter. Farming is alright, but I know a dozen other games that does it better. The story is alright, but it’s nothing new. I essentially predicted it within 3 minutes, but it takes forever to progress through.

There is one thing this game did really well though, and its the fact that a couple of my Planimals will walk around with me and follow me. I mentioned this earlier, but it helped my frustrations to look at my mutanko just standing there. He’s a little guy. I love him. 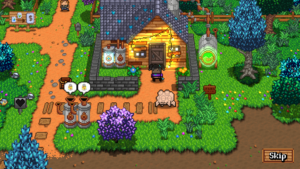