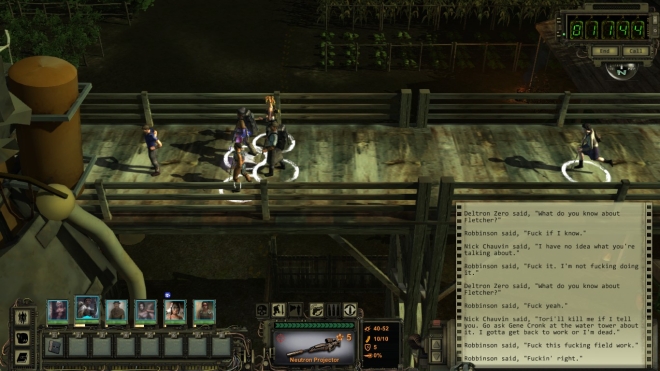 What all that history means for Wasteland 2 is that it’s old-fashioned. The first thing you do is put together a team of four Desert Rangers either by choosing from pre-gens or building them from the ground up; the second thing you do is regret every decision you just made. Once you start playing you might realise the Barter skill is basically useless, or that your sniper doesn’t have enough action points and he can only fire every second turn, or you should have Perception and Demolition on the same character so the the person who spots traps can also disarm them, or you’ve doubled-up on abilities that a character who joins your party at the start of the game already has, and so on, and so on. It’s oldschool enough to be full of traps for the unwary, and the wary will fall into some of them as well.

Eventually you’ll be ready to set out on your mission to solve the murder of a fellow Desert Ranger and track down the source of the mysterious radio transmissions he was chasing. Clouds of radiation have walled off Arizona from the outside world for so long most people don’t believe there even is an outside world anymore, and it’s your job to figure out if they’re right. Your radio barks into life as you cross the map, cries for help coming from settlements you need to rescue if this crusty leftover civilisation is going to survive. One thing that isn’t old-fashioned about Wasteland 2 is that it’s built around conspicuous Big Choices. When two locations are attacked simultaneously and you have to choose between them anyone who plays modern games will know that the one you try to rescue second is automatically doomed. Throughout your adventure you’ll be making these kind of choices: which faction to side with, which community leader to help, which character to let join your squad. You’ll spend a lot of time thinking about what would have happened if you chose differently and considering a second playthrough to find out, but since a single playthrough takes 50 hours, if not more, you might not have the time.

A lot of your time is spent shooting bad dudes. The other thing Wasteland 2 has learnt from modern games is to give its turn-based combat transparent systems, like XCOM: Enemy Unknown. A grid surrounding the active character shows how far they can move and still attack, and how far they can get if they sprint instead; cover is highlighted with a pop-up explaining how much of a bonus it gives. Run for cover or crouch where you are and take an extra shot? Switch to a weapon with a lower action-point cost but lower damage? Try for a headshot or switch to burst fire? There are plenty of options, enough to add tactical depth. Unlike in the Fallout games though, there’s no way to end a fight once you’ve started it unless you win, so get used to killing your way out and then reading evocative text descriptions of the gore you’re spreading across the wastes like grease across a pizza box. There’s a lot of text in Wasteland 2. More words than the entire Harry Potter series, according to InXile. Some characters are voiced, but mostly you’ll be reading what they have to say as they rant about their faction and its philosophy. Mad monks worship an atom bomb they call Titan, Mannerites follow a code of politeness from an old book of etiquette, their rivals follow Libertarian ideals from a book called Ultimate Power. Weirdly though, the most memorable characters are animals you recruit with the Animal Whisperer skill. Having a goat, a rat, and two chickens following you makes you feel like a Disney princess, although all that barnyard noise might get on your nerves after a while. If you didn’t bother reloading when they stepped on landmines I wouldn’t blame you.

For the first half of its 50 hours I was satisfied by Wasteland 2, lightening the dark corners of the map and trying not to run out of water on my way back to base. But the second half feels rougher, with a new area to explore where each settlement seems to have been designed by someone different, with different ideas about even basic things like how to highlight which buildings you can enter. The missions get more blatantly fetch-y, especially when you’re running back and forth between a clinic and a poisoned well, and the fights grow repetitive. 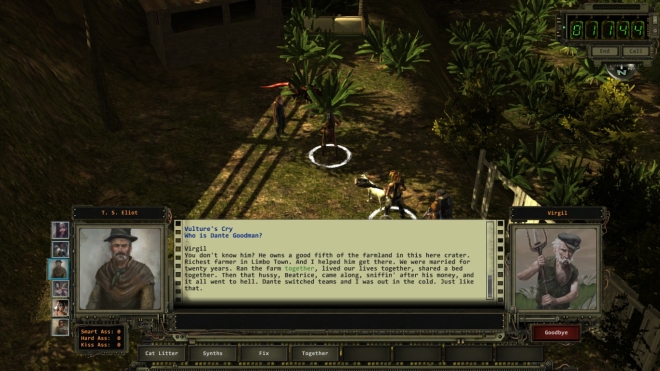 The isometric RPG has made a comeback recently, but games like Shadowrun: Dragonfall and Divinity: Original Sin seemed like they were building on the formula more ambitiously than Wasteland 2 does. Even compared to an older game like the original Fallout from 1997 it suffers – while Fallout owed a clear debt to Wasteland it was enriched by adding retrofuturistic 1950s sci-fi elements to its post-apocalyptic wild west. Leaving a fallout shelter where conservative America survived and entering a junkyard world full of mutants felt dangerous, but then you realised the new world was a more diverse and potentially better one. It was a metaphor for growing up and leaving home that gave thematic heft to the entire game. Wasteland 2 has no real theme, is content to recycle tropes. A character quotes BladeRunner, the children of warring tribes act out Romeo & Juliet, the villain even gives a “We’re not so different, you and I” speech.

There’s still half a very enjoyable game here, and if you’re enough of a fan of the genre to have already played the other recent oldschool revival RPGs you’ll want this next, but I can’t help but feel if we were still in 1997 a game like Wasteland 2 wouldn’t be quite such a big deal. 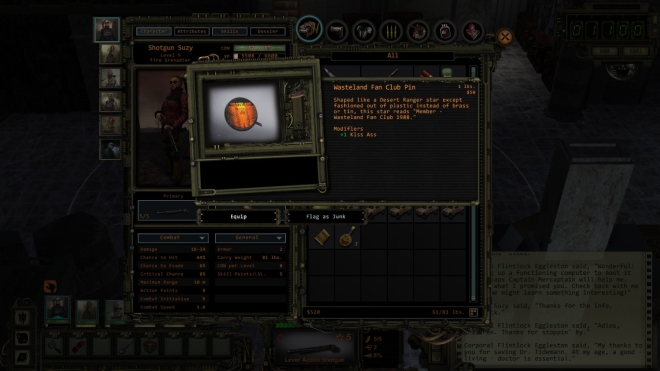