Skip to content
HomeArticlesAlice’s Adventures In The Shivering Isles: Part 2

In part one of this game diary, Alice got tired of spending her holidays in Wonderland and Looking-Glass Land and wherever she went in those American McGee games and decided to visit the Shivering Isles. An add-on for The Elder Scrolls IV: Oblivion, this is the domain of Sheogorath, god of madness. It’s a odd place, even here on its outskirts where visitors who aren’t quite crazy enough to be allowed in straight away wait their turn – or alternatively plot to murder the Gatekeeper and sneak in.

Inside the Garden of Flesh and Bone, skeletons attack. With a name like the Garden of Flesh and Bone it was always going to be skeletons, unless it was zombies. Between Jayred the hunter’s bow and the “I can’t believe it’s not Vorpal” sword Alice looted from the adventurers killed by the Gatekeeper back in part one, the skeletons crumble back into bones within seconds. Oh, of course, bones! That’s what we’re here for. Lying in the grass are the bones of one of the Gatekeeper’s brothers. We pinch those bones as it begins to rain, which is very symbolic of something or other.

As rain pours down on the Isles, an amphibious Grummite crawls out of his pond. Water strengthens these frog-men, so when it’s raining they regenerate health even while on land. That doesn’t help this particular Grummite, however. Fearing that he might be about to recite some poetry at her like animal people usually do, Alice hacks off his head while her friend Jayred pincushions him with arrows. Jayred isn’t actually as good a shot as you might expect, because one of his arrows goes straight through Alice. It’s only a scratch. No, really. Look at my health bar.

If I’m about to face the Gatekeeper with an ally as accurate as Jayred covering my back, I’ll need better armour than this blue dress, even if it is a rather pretty one I had to install a user-made mod to get. Fortunately that sword we looted from the dead adventurer came with a set of steel full plate armour. Even more fortunately, it happens to be a perfect fit. It’s time to dress up like the girl in that daft Tim Burton movie. That dead Grummite had a bow, so we take it, stock up on arrows that Jayred carves out of the bones of the Gatekeeper’s dead brother, and then dip them in the handkerchief soaked in his mother’s poisonous tears. Honestly, shooting the Gatekeeper with these will basically be a family reunion. He should thank me.

As the dramatically appropriate rain continues, Alice and Jayred sneak towards the Gatekeeper, somehow not making a sound in full armour. Then Alice puts two arrows into the giant and he drops. Arrowed! 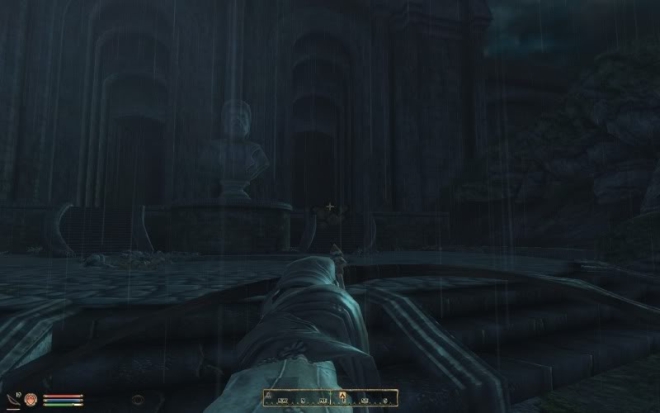 It is a little bit anticlimactic, but I suppose at least the whole thing didn’t turn out to be a dream like these things usually do when Alice is involved. Although it’s still possible this could all turn out to be a dream and I’ll wake up and find out I’m disembowelling my pillow rather than up to my gauntlets in Gatekeeper guts, fishing around for the keys to the Gates of Madness that have been stitched into his innards.

There are two keys. One of them opens the door to the half of the Isles called Mania, while the other leads to Dementia. Whichever door you choose will apparently change you forever, and throughout The Shivering Isles we’ll come across more of these choices between those two options. Other games give you a moral compass marked Good/Evil or Paragon/Renegade, but only The Shivering Isles makes you pick between ‘Frenzied Hyperactivity’ and ‘A Disoriented Decline Of General Cognitive Ability’.

Thank goodness we managed to kill the Gatekeeper rather than hanging around waiting for Sheogorath to drive us mad before we were allowed past this wall, thinks Alice, blithely opening the door to Mania. Mania sounds more pleasant, and it is. It’s a bright, fungal place full of rude growth and colour. Mostly orange, but still. Orange is a colour. 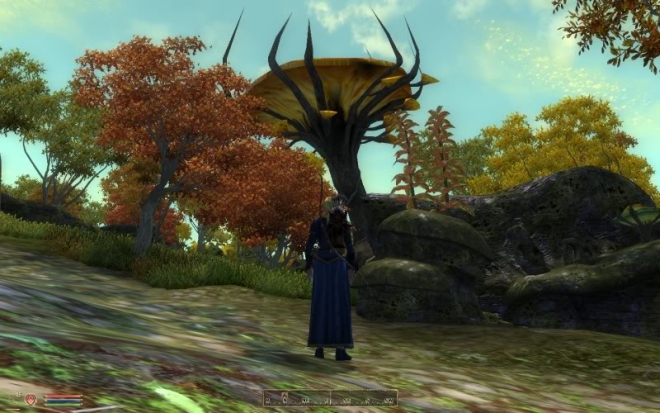 The Gate of Mania gives Alice a magical blessing as she passes through it – the ability to cast the Frenzy spell, aggravating NPCs so that they attack each other. Which is nice.

Looking at the map, there are two ways to cross the Isles to Sheogorath’s palace in New Sheoth. Staying on the north here in Mania, we can take Overlook Road past the Laughing Coast. The other option, to the south, is to head into Dementia and take the Low Road past the Hill of Suicides. You know, I think that Mania was definitely the better choice. Let’s stick with that.

Jayred hurtles off into the wilderness to hunt a new variety of creatures with all-new bones to collect. Alice wishes him luck, but he’s already gone. Alone, she heads along Overlook Road until she comes across a campsite belonging to a blue-robed wizard who calls himself a Heretic. Rather foolishly the Heretic tries to magic Alice to death, which ends badly for him. Honestly, hasn’t anybody seen the Tim Burton movie? Alice is pretty handy with weapons now.

On the body of the Heretic, Alice finds an object called the “Fork of Horripilation”. That may sound like a nasty thing, but Alice went to a proper school and is fully aware that horripilation just means causing goosebumps. Wandering bizarre dreamscapes usually provides plenty of opportunities to show off your expensive vocab, but so far we haven’t met anybody in Mania who prefers haughty monologues to violence.

And then we encounter two Golden Saints. 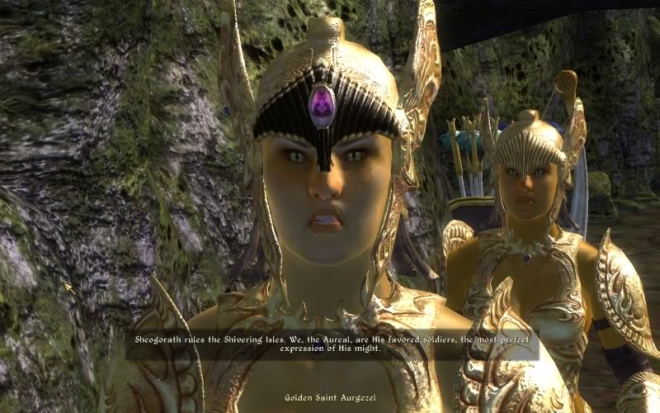 Honestly, I thought saints would dress less like shameless hussies, but what do I know? I’m just a prude from the Victorian Era. The Golden Saints are the Madgod’s guards in Mania, who tirelessly patrol its roads and byways, pausing only to deliver sneering explanations of the island’s geography to passing travellers. They march on and Alice’s next meetings are with a slithering Baliwog and a knotty, bark-covered Gnarl, who are less talkative and more into biting. Getting into fights has got us turned around, and now we’re a little lost among all the gigantic mushrooms and moss of Mania.

Eventually, we stumble across the town of Split. It sits smack bang on the border, one half in Mania and one half in Dementia. As the town is split down the middle, so are its inhabitants. Every one of them has been divided into two people. How could something like that happen? Alice asks a local.

A wizard did it. Stupid layabout mage. Had a theory about each of us having a Manic and Demented side.

He’s a wizard, and he used magic.

What a strange thing to happen. How do the people of Split feel about having duplicates? It must be jolly to always have somebody around to play with. Let’s check what the vox populi has to say about their other halves.

I sure don’t like him! No I don’t, you fuzzy little sweetiepie!

He’s got to go. Before he eats me.

There would be more corpses to count if someone would get rid of all the doubles around here.

Every single person in Split would like to see their doppelganger dead. And they want me to do it, because killing your neighbours would be a bit off, although hiring a wandering stranger to do it is apparently fine. Also, one of Sheogorath’s laws prohibits suicide and everybody in Split is afraid that killing their other selves might count. (Apparently the Madgod sees suicide as a cheat’s way out of his realm, condemning those who try it to eternity on the Hill of Suicides. Why would anybody want to leave such a delightful place though?)

Alice reacts to being hired for murder in the only sensible way.

She runs far away from Split and vows to never return.

Come back soon for part three, in which we’ll get to see New Sheoth and find out how mad the god of madness really is. (Spoiler: quite mad.)