Skip to content
HomeArticlesAlice’s Adventures In The Shivering Isles: Part 7 Putting Him Together Again

In part six of this diary, Alice chose a side in the conflict between Mania and Dementia that divides the Shivering Isles. She plumped for Mania, siding with the Golden Saints in their battle with the Dark Seducers because, honestly, look at those names. Then Alice became Duchess of Mania by poisoning the previous regent – having already poisoned the Gatekeeper to gain entrance to the Isles. A theme is developing.

Murdering the Gatekeeper giant seemed like a good idea at the time, but that was a time when the Shivering Isles weren’t being threatened by the chessboard dirtbags of the Knights of Order. Now Alice has had to befriend a witch named Relmyna so that she can assemble a replacement ogre to guard the gates. Apparently, once you’ve got the right parts building a giant is a simple matter of connecting tab A to slot B. Here’s Alice trying to choose which limbs to attach to her homebrew monster. The leg bone’s connected to the – oh my goodness, that’s revolting.

Relmyna takes all of the parts we’ve selected and pops them in her vat. It’s like we’re making Gatekeeper stew. Then, the witch summons one of her Frankensteinian servants, the Flesh Atronachs, and pours our new baby onto his malleable frame. I’m allowed to choose which legs he has, but not whether he wears pants?

Finally, we can report back to Sheogorath and Haskill that the gate is guarded once more. The knights will still be able to use their obelisks to teleport in, but only a few at a time. No more frontal assaults.

Perhaps Your Grace is more susceptible to our Lord’s Blessings than it first seemed. Interesting.

I’d pay more attention to this foreshadowing if I wasn’t hopelessly lost in your eyes.

Before things can get any more awkward, a messenger from the Dark Seducers bursts into the hall. Their stronghold of Pinnacle Rock has been attacked by the forces of Order, and they were defeated. We only just plugged one gap in our defences and they crawled in through another.

A perfect job for you, my newest and only Noble in the realm! If order has entered my army’s stronghold, things have taken a disturbing turn.

It’s like Jyggalag knows exactly where to attack. As soon as we reinforce one location, he attacks another. How does he do it?

Because He is Me? I’m Him! We’re a bit of each other, really. I won’t be here when He arrives because I’ll be Him. Happens every time. The Greymarch starts, Order appears, and I become Jyggalag and wipe out my whole realm.

I ought to slap you. This is the kind of thing one would like to have known sooner.

Cat’s out of the bag on that one, isn’t it? Who puts cats in bags, anyway? Cats hate bags.

Fine. How long do we have before you become your worst enemy who isn’t me right now?

So, to do our duty. The Dark Seducers – they prefer to be called Mazken, for obvious reasons – use Pinnacle Rock as their haven. Like the Golden Saints they’re immortal, and when killed return to Oblivion. The rivers of Oblivion flow from a wellspring here at Pinnacle Rock, where the Mazken ring bells to call their sisters home. And I thought the Dark Seducers would live somewhere bright and cheerful.

The surviving Mazken explain that Syl, Duchess of Dementia-in-exile, led the Knights of Order in their attack. Which is why they’ve turned to Alice, Duchess of Mania, for help even though I sided with their enemies as recently as yesterday. We’re all friends now, though, so Alice leads a party of Mazken into the depths to take the place back. As soon as we enter, the Mazken all collapse in an inert heap. The forces of Order have sealed the Wellspring shut, cutting them off from their lifesource. Without the armoured Mazken clanking around making a racket, Alice sneaks through the darkness towards the Wellspring. It’s been covered by a crystalline structure, like the obelisks the Knights of Order use. Being crystal it’s susceptible to vibrations, such as might be caused by smacking sam hell out of the ruddy great bells the Mazken use to call their sisters home down the Oblivion River. The bells ring, the crystal shatters, the Mazken come flowing out of the Wellspring and drive the knights out of Pinnacle Rock once more.

As a reward for returning them to their unnaturally prolonged heathen existence, they give Duchess Alice a suit of their armour. It’s not really her look. 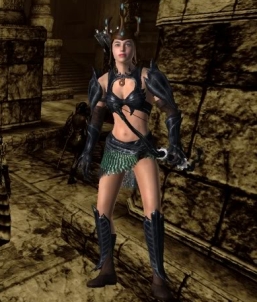 I didn’t think I’d find anything that doesn’t match this magnificent hat.

A far better reward is that Alice can now summon a Mazken once per day. That’s in addition to the beings she’s already learned to summon: a Flesh Atronach, a Golden Saint, and Haskill himself. That’s enough for a party.

This is the dinner table at the court of Mania. It was last used for a party where the Duke died, and also there was bad poetry. No wonder nobody wants to sit down. No room! At least, not for more wine. The bottles keep falling over.

We have invited all of the guests. What we have forgotten is the way summoning magic works. Alice can only summon one friend at a time. Two if you count Haskill. 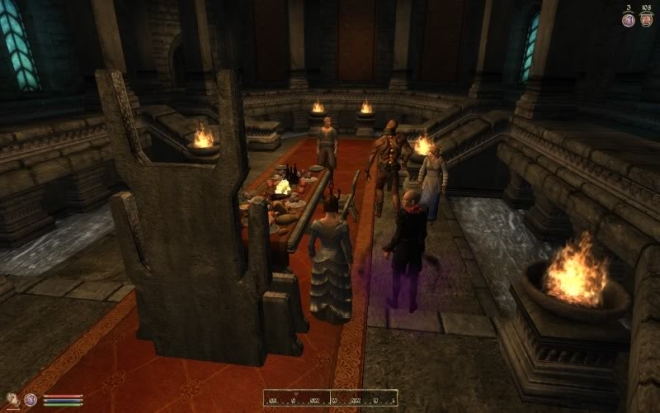 I’ve seated you next to the flesh monster, hope you don’t mind.

Also, the other thing about summoning spells is that they wear off after a minute and everybody leaves and you are alone forever with all of the wine. It’s my party and I will cry if I want to.

At least Sheogorath will be entertaining. He’s always got some zany rambling to liven things up with. Let’s visit the throne room and see what he’s got to say today.

Time. Time is an artificial construct. An arbitrary system based on the idea that events occur in a linear direction at all times.

I think I preferred you when you were threatening me and shouting about cheese.

Chin up, man. What’s the worst that could happen? Sheogorath has a great fall, and vanishes in a puff of cold logic. He’s gone, and somewhere Jyggalag is made manifest. Damn the forces of order for being organised ahead of schedule while the forces of whimsy are faffing about, um, throwing tea parties. The Greymarch has begun and soon the Isles will be as clean and lifeless as a funeral parlour.

Cheer us up, Haskill.

He is gone, but hope is not lost. We have a rare opportunity here, but I hesitate to do what must be done. If the throne of Madness remains empty when Jyggalag storms the palace, he will prevail. But there is a chance that the throne may not be empty.

You mean all I have to do to save the Isles is sit down in a chair? I think, Haskill, I may be able to manage that. You know, if I put my mind to it.

Of course, it’s never that easy. To occupy the throne you need a staff of office, and not just any old stick. You need to make one special and only at the library of Knifepoint Hollow – another cheery name brought to you by the Shivering Isles Tourism Board – can the secret of its making be found. On the way to Knifepoint Hollow, we find a familiar landmark. Something we perhaps saw in a dream. This is where those who offended Sheogorath used to end up, after being dropped from a great height. One of the punished here has an execution warrant on his body – let’s see what heinous crime he committed.

“Attempting the growth of a beard.”

I miss your craziness already, Sheogorath.

In part eight Alice will visit scenic Knifepoint Hollow, have an encounter with a looking-glass, and find another excuse to change clothes.