Skip to content
HomeArticlesAlice’s Adventures In The Shivering Isles: Part 3 The Horror Of Horripilation

In part two of this game diary, Alice began crossing the Shivering Isles on her way to New Sheoth and an appointment with Sheogorath, god of madness. Although that’s a very important date she did get a little sidetracked in the town of Split after discovering that everybody there had a double. All of the Splitizens had magical twins they hated, and all of them wanted Alice to murder those twins for them. It was all a bit creepy and we decided to split. Get it? It’s funny because the town is also named – never mind.

The town of Split fades into the draw distance, safely somewhere far behind us among the rolling hills and giant mushrooms of Mania. What is with all these crazy people with multiple identities, we think as Alice runs away and I look at the map.

Eventually finding the path northwards to New Sheoth again, I meet a man walking the road who thinks he’s too good to wear a full set of clothes. He says his name is Yngvar Doom-Sayer and he’d like to tell me about the apocalypse. Which sounds depressing.

But my message is actually one of comfort. The world is ending, and we can’t do anything about it. Once you accept that, you’ll be at peace, like me.

I’d be able to take your prophecy more seriously if you were wearing a shirt.

Over the next hill, Alice has her first view of the city of New Sheoth and its looming palace. Sitting on the border of Mania and Dementia just like Split did, New Sheoth is also divided in half, two cities for the price of one. We enter through the half called Bliss, on the Mania side. It’s bright and European-looking, with a lovely fountain and Golden Saints everywhere. In the town square of Bliss there’s a funny little man waddling around on his haunches. Hello, funny little man! What particular delusion do you happen to suffer from? It seems like everybody in the Isles suffers from a peculiar delusion. Aren’t you all very special individuals.

Careful! Don’t want to get squashed. Hello… don’t mind me… I’m a little tired. Can’t sleep at home, you know. The walls. They aren’t safe.

Have you tried sleeping outside?

Well, there are statues that could fall on me outdoors.

If it were me I’m sure I’d be able to find somewhere where there weren’t statues around.

Oh could you? How kind you are!

That wasn’t really an offer… but now that you mention it, I am rather kind, aren’t I?

And now, finally, the palace. You won’t be surprised to learn that it’s split into two halves with one wing for Mania (on the left) and one for Dementia (on the right). The garden parties they have must be an absolute riot. No time to faff around admiring the architecture; we’re late for a very important date. Right on that dividing line in the middle of the palace sits Sheogorath, the prince and god of madness, the man so mad he eats mad hatters for breakfast and then for the rest of the week his poop wears tiny hats. He’s clapping as we approach. Haskill, the chap with the collar who helpfully welcomed us to The Fringe, has somehow beat us here but he’s too detached to bother applauding. A new arrival! A shame about my Gatekeeper. I’m so happy, I could just tear out your intestines and strangle you with them.

Goodness, you went from cheerful to threatening very quickly. How do you manage that?

I’m Sheogorath, Prince of Madness. You’ve probably figured that out by now. Let’s hope so. Or we’re in real trouble… and out come the intestines. And I skip rope with them!

Oh, that’s how you do it! You’re bipolar and I bet the whole of the Isles is a reflection of you. Aren’t you clever?

Take this trinket of mine. Perhaps it will serve you well. Or look lovely on your corpse.

That trinket is a magical necklace called the Charity of Madness. It gives us a few percent of resistance to fire, frost, and shock damage. Just like madness does in real life.

We’ve established that you can switch personalities mid-thought, jolly good for you. Is that all there is to you? An obsession with games, maybe? I’ve done cards and chess already. You’re not a fiend for Monopoly, are you?

I need a champion and you’ve got the job.

Time to save the realm! Rescue the damsel! Slay the beast! Or die trying.

It better not be Trivial Pursuit – wait, what did you just say?

Apparently there’s an ominous thing called the Greymarch coming. All kinds of undesirables are about to try to force their way into the Isles and I’ve just killed the Gatekeeper who would have stopped them. Whoopsy! So my first task is to get something called Xedilian working because apparently that will keep the naughty people out. I’d like to know what a Xedilian is first. Perhaps I can ask Sheogorath for more details.

I’m trying to decide what to have for dinner. Oh, how I love eating. One of my favorite things to do. Talk to Haskill if you need more information. He’s got more brains than a brain pie. Oh… brain pie! Perfect!

We’ve already established that you’re Mister Spooky-Dooky Changey-Mindy, thank you very much. And that comedy Scottish accent isn’t fooling anyone, you keep slipping into Irish, almost like you’re two different people. Why, I’ve half a mind to stick you with this Fork of Horripilation I found back in part two. I wonder what would happen then?

You really shouldn’t have done that. Enjoy the view. ZAP. 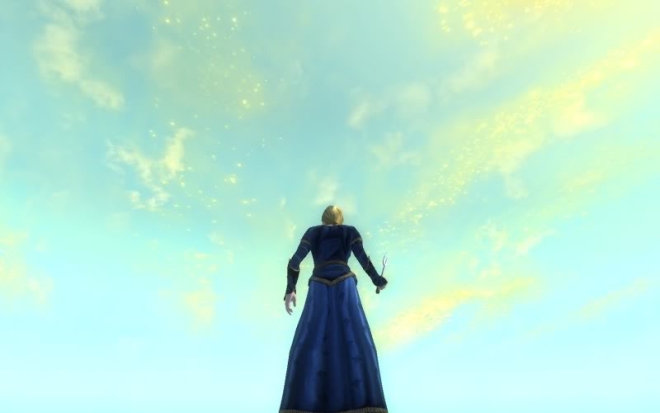 Oh! You’re right, it is rather scenic. 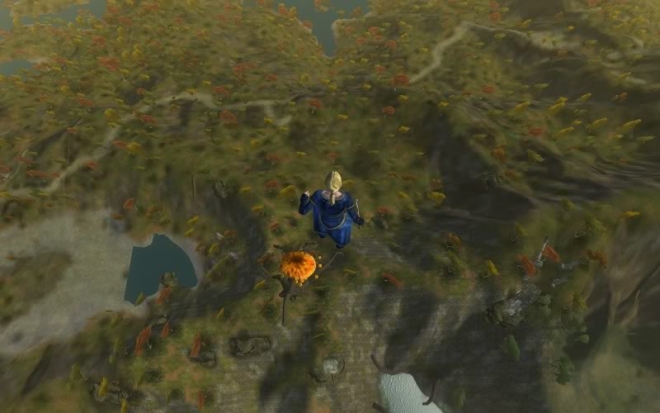 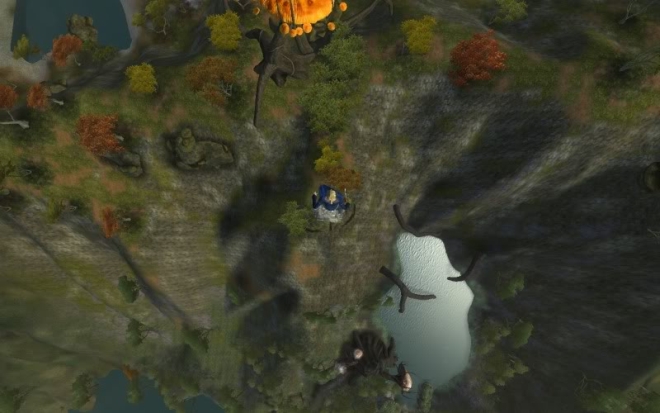 This is going to be one of those falls that goes on and on and ends with a gentle bump, isn’t it? The end. Hope you enjoyed this game diary, which is now completely finished. Just kidding, come back soon for part four and we’ll find out how Alice survives and whether it involves reloading a quicksave.