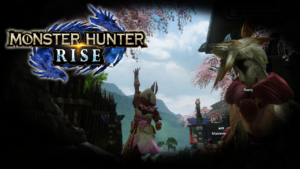 You are a new hunter in the beautiful, but small, village of Kamura. Your task as a hunter? To hunt the biggest, baddest monsters that roam this world. But that’s not all, you are also tasked with protecting this village from a devastating event called the rampage. Where a dozen monsters, bigger and badder than the one before it, descend upon Kamura in a furious siege. And you have to not only repel it, but also discover the cause of the rampage in an effort to put an end to this ferocious stampede.

Monster Hunter Rise is the newest game in the Monster Hunter series, with a semi-realistic 3D artstyle, detailed gameplay and mechanics, and a lineup of monsters who will challenge you, while managing to be distinctive from other games in the series. 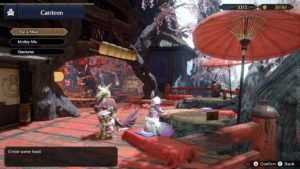 Monster Hunter Rise at its base is just like every other Monster Hunter game. That is you are a hunter, and you hunt monsters, each unique and with its own set of behaviours and abilities. You can choose from 14 weapon types, such as a hunting horn, great sword, hammer, dual blades, bowgun, or sword and shield, just to name a few. Once you complete the hunt, you get rewards such as money and points, and resources from the monster you just carved. And you can use these rewards to make extremely cool and helpful armour and weapons, and upgrade your gear.

Monsters do not have a health bar in this game, and instead you will have to rely on visual cues to tell you when it’s exhausted, close to death, or if it’s about to do a particularly brutal attack. So you have to be observant, learn about the monster, and adjust your gear and approach to achieve a successful hunt.

Monster Hunter Rise also has some mechanics unique to this game, such as the addition of wirebugs, which creates wires that can help you pull off devastating abilities, hold onto monsters, and even allow you to ride the monster, controlling it for a limited time. Another unique feature is the rampage, where a stampede of monsters attacks the village, and it’s up to you and some brave NPCs to push them back before they can get through the giant gate. You have access to special, heavy-duty weapons, such as cannons and ballistas, to help, and when the gong is hit it gives everyone a surge of power, allowing you to go toe-to-toe with some of the more brutal monsters in the rampage.

And outside of the rampage, there is the mystery behind the cause of the rampage. And solving that mystery will mean having to face, you got it, more monsters. 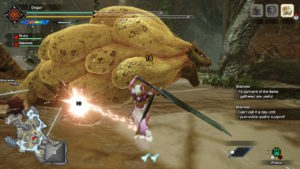 The music in these games have always been rather epic, and quite beautiful. And Rise is no different, including some beautiful singing from characters in the game. When the language is set to Japanese, you are introduced to poetic singing with the introduction of the monsters, like the game is telling you a story. And the audio experience can be extremely helpful during your hunt. Your characters will shout call outs, warning you when the monster is targeting you, but also telling your teammates when you’re in trouble, reloading your bowgun, or taking a health potion. It’s not essential, but it is helpful, especially if you and your friends aren’t using microphones. 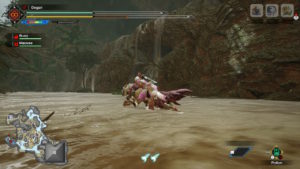 I have been playing Monster Hunter for about 9 years now, and I’ve always enjoyed how over-the-top, challenging, and kinda goofy the games are. And I really got to enjoy the multiplayer aspect with the release of Monster Hunter World, and that hasn’t changed with Rise. Rise has streamlined a lot of the mechanics from previous games, making it less daunting. There are still a lot of areas that have me looking up guides to understand, but you can enjoy the game without it. The hunt itself still has a lot of details to think about and consider, and to hopefully turn to your advantage. I’ve had my friends find a stinkmink to lure another monster to our target, so that the resulting turf war would soften them up a bit.

I would advise making your way through the singleplayer village quests first, as that introduces most of the monsters, mechanics, and features of Rise, and they’re not too challenging. It’ll also introduce you to the ‘big bad’ monster. But once you are ready, jump into the hub quests for the multiplayer experience, and prepare for a wild ride. Whenever we felt things were getting a bit easy, boom. We’ve been mauled by a tigrex and someone just rage quit.

So what do we do? Have a break. And then try again. Craft a special hunting horn that looks like a cello but gives us earplugs, bring out some flash bombs and poisoned food, and get a bit smarter about our hunts.

And then once we succeed, cheer and pat ourselves on the back and go check out what cool armour we can make now, so you can get back to the hunt.

Hey, we’re monster hunters. What else are we going to do? 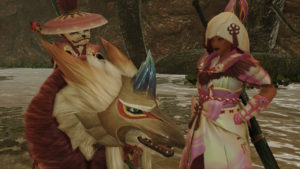