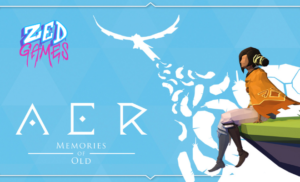 Every pilgrim starts here, venturing into the cave that shelters the shrine. Along the way giant tablets stand, carved with the words of the past, describing hopes and fears, legends and history. At the shrine itself you pay your respects, lighting the incense before the statue of a figure who holds a lantern in their hands. Your ritual complete, you turn to leave, only to realise that the lantern has started to glow. Bewildered, it floats towards you and you reach out to it, and once your hand clasps the handle you experience…

A vision of something terrible.

The cave starts to crumble and collapse.

And suddenly you are surrounded by ghosts. No… echoes of the past, revealed by the lantern, capturing a moment of fear forever.

As you flee the cave and the shrine, you find more of these echoes, these memories, and once you escape you find that you must continue your pilgrimage and find out why the lantern has lit itself for you.

Aer: Memories of Old is an exploration adventure game with puzzle and platforming aspects. With the ability to transform into a bird, satisfying flight controls, a vibrant, beautiful, minimalist art style, relaxing music that matches the mood, navigating this shattered world is enriching, satisfying, and never feels like a chore. Seeking out the history, discovering the events that led to this, and figuring out your part to play in it, is up to how thorough you are through your journey. 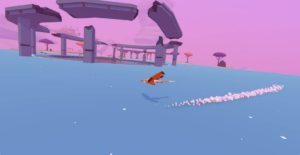 In a world that is literally shattered and broken apart, having the ability to fly is an essential one, and in Aer the flight system is beautifully managed. With a single button in the air you transform with a flourish, and spread your wings. With a few flaps of those wings you speed up, you can turn and bank, dive and rise. There can be a lot of distance between islands, with a lot of empty space, and you’ll be flying a lot. So it is fantastic that the act of flying feels fun, fast, and satisfying. I can look out for visual cues indicating speed boosts in the form of wind channels, bursting through clouds feels invigorating, and diverting my journey slightly to investigate a floating island with a memory on it only adds to my pilgrimage.

Throughout the world you’ll need to unlock shrines, some of which requires solving a puzzle unique to the shrine. There is minimal information, figuring out the puzzle is all up to you, but I only ever felt ‘stuck’ on one puzzle, and that was only because I accidentally backtracked. They’re pretty straightforward, but there is a diverse range of puzzles for each shrine, and for inside the shrine itself.

As you make your journey you’ll encounter tablets and scrolls that record events that have happened, and through these you’ll piece together the history of this world, and a bit of your own history. But what really brings these history lessons to life are the echoes, the memories you find in the world, throughout the whole world.

Indicated by little symbols, once you light the lantern the memories are revealed to you. Some of them are quiet moments between friends, past explorers witnessing something remarkable. A lot of the memories capture dark moments of history, of the deaths, fighting, fear, people trying to escape, people trying to fight back.

Weirdly enough, the memory of a death that got to me the most was of an accident. A mundane, unremarkable accident.

The history becomes humanised, and I spent a lot of time flying around finding more of these echoes. And as I progressed, the memories told a story of greed and darkness, and one woman trying to prevent the end. I won’t say anymore about it, as finding these for yourself is a huge part of the experience.

Now, if I need to find one thing to nitpick about, it’s the platforming. Auk as a character is designed for flying around, but as a human, she can be a little tricky with her jumps. At times there would be a delay between pressing the jump button and actually jumping, and sometimes there would be no jump at all. And it happened just often enough to be quite frustrating, especially when I’ve solved the puzzle but I can’t clear this 3 foot gap in the floor.

I would get over my frustration once I’ve cleared the shrine and I’m back in the sky though. Now, moving onto the music. It is bright and dark, open and feels like taking a deep breath into your lungs, or suffocating like you realise you’re a creature of the air and you are deep within this island, lost and trying to trust your path. Within caves and shrines it feels sombre and humbling, with the right combination of eerie notes to keep you on edge. But when you take flight, and the sun is shining, the music turns joyful and vibrant.

It fits the game and the art style, complimenting in a way that isn’t overwhelming nor redundant. And often I find myself leaning forward in my seat as the organ-like notes play, and I realise I’m about to see something special. I heard about Aer a few years ago and thought it looked cool, and then forgot about it until I came across it on the Nintendo store. I picked it up, installed it, and forgot about it again until the holidays when I suddenly had a lot of spare time.

And I just fell in love with it.

I think we’ve all had our daydreams in that boring class where we looked out the window and wondered what it would feel like to be a bird. And I feel like Aer fulfilled that fantasy quite well. But to have such a satisfying flight mechanic, and then to combine it with the memories and snippets of information that encourages you to explore, the two becomes a wonderful combination, and even if I found myself crossing the entire map multiple times, it was fun and relaxing, and a bit exciting at times. It encourages you to take your time and your path, and I found a lot of enrichment in that. It’s a short game, but well worth the afternoon I took to just look around.